This time of year I’d usually be getting ready to travel to Warpcon. Sadly, this year, I won’t be there.

Actually, though I’ll miss my pals, Cork’s English Market, and the best fish and chips this side of Master’s, it’s OK. I’m tired, the last couple of months have been tough, and it’ll be nice spending a bit of time at home.

Last year, I flew somewhere or other thirteen times. Six trips were to Europe. Every few weeks, I’d seem to be packing to go someplace. And while this may be an Diamond-Status First World Problem, I crossed 2016’s finish line physically exhausted and mentally dishevelled.

Work helped to distract me, Munchkin and Dork Tower kept on schedule, and no longer pounding four beers a night, plus Xanax, to numb it all has (SHOCK! HORROR!) proven decidedly healthy.

That said, some things fell by the wayside: updating the blog, here, for a start.

Anyway, here are a couple of updates. More to come, as I get back in the swing of things. 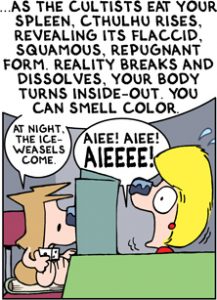 Tuesday’s Dork Tower is actually based on real life.

I used Call of Cthulhu to introduce her to roleplaying games. And I was a pretty good CoC GM. I had the lights down low. I played atmosperic music. Krista, one of my veteran players, ended up in the fetal position, rocking back and forth on a couch. Her – not her character.

To this day, my wife describes her first roleplaying experience thusly: “I went crazy, I got turned inside-out, and then I died.”

She’s not roleplayed since.

I’ve never been the brightest cultist in temple. 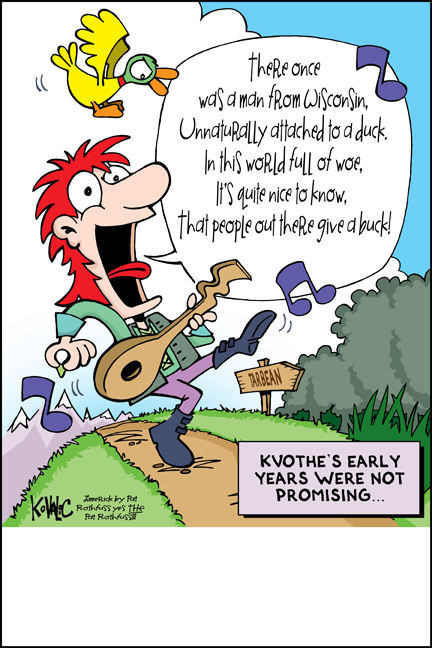 YES, Pat wrote that for backers of the ridet. YES, I can’t believe I have such awesome pals.

Once it gets back, I’ll sign them all, Pat will sign a few, and swag will be in the mail soonish!

The new Coloring book should be done as well. That will be a pdf download for all backers, at all levels.

It’s been three months since the ride, but this will actually be (fingers crossed) the quickest I’ve ever gotten the rewards out.

Next year? Aiming for an even quicker turn-around. Quack!