My week not at Gen Con:

* I helped my pal James win this round of the Cadburys Pocketgame competition. Well, when I say “I,” I really mean you all: the Army of Dorkness. From being down by fifty votes on Friday, the Army of Dorkness swooped in and helped Flick Racer win the thing by a comfortable margin of more than one hundred votes. Just amazing. James will be announcing a really cool “thank you” soon, and, with luck, so will I.

* I went to see the New Pornographers with my wonderful wife and a slew of good friends, and the show turned out to be utterly EPIC. I was THIS close to Neko Case’s voice! THIS close, I tells ya! 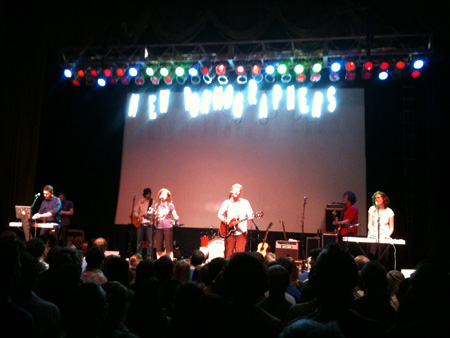 * The lovely and talented Judith and I attended a Madison Mallards “Tribute to Bacon” night at the ballpark, where Judith suggested she’d go for a Bacon Chocolate Sundae, if they had one. They didn’t. But they did have bacon (and lots of it – some even in handy caramelized bacon bit form), and they did serve chocolate sundaes. So I suggested to Mallards VP Vern Stenman that they missed an opportunity here. He agreed, called the head of food service over, and by the fifth inning the Bacon Chocolate Sundae was on the Mallards’ menu. And it was a huge hit – at times, the line was 20 deep. So popular was it that the Mallards are keeping it on their menu. So…go Team Judith and John. 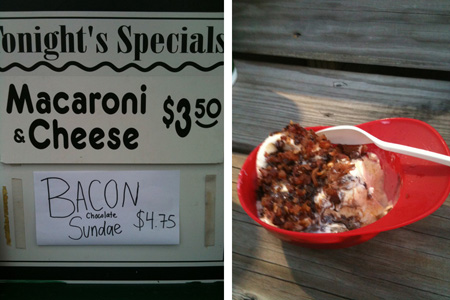 * Lest you worry about me eating too many Bacon Chocolate Sundeas (De-LISH-us, btw), I’m down another couple of pounds. This makes it 16 pounds lost, mostly through eating less (shock! Horror!) and going on long walks and bike rides.

* But the MAIN thing that happened while you were at Gen Con and I wasn’t? Seeing Louisa pedal her tricycle – on her own – for the first time. I started off pushing her, and she put her feet on the pedals. I gave her a bit of a shove, and she went off. Four feet later, I realized it was no longer momentum from the push that was keeping my baby girl going, but those little legs. I was stunned, and outrageously happy. I WAS THERE TO SEE MY DAUGHTER’S FIRST BIKE RIDE. Much like last year, when I skipped Origins, and saw Louisa pull herself up for the first time, I was overcome by a wave of pure Dadda happiness.

I hear Gen Con was great, and I’m glad everyone had such a cool time. Miss you all, and I’ll be back soon.