So, last Sunday, this happened: 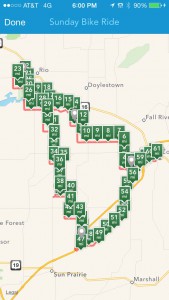 I did in fact bike 60 miles (and survive) with a duck on my head, and plush tentacles wrapped around my body like the loving embrace of a Great Old One. And you guys got together to raise an astonishing $13,500 for the CSA Fairshare coalition. (Overall, the ride raised more than $36,000 for this great cause).

The duck was no problem: as the Lovely and Talented Judith figured out last year, all that was needed was a little bit of Velcro tape to get it to stay on my helmet:

I probably should have thought about how to attach the tentacles (one green, one purple) sometime prior to 11:30 pm, the night of the ride, though. The initial idea was to strap them to the bike. Sadly, there was no real non-life-threatening way to achieve this, that I could see.

Finally, I simply grabbed some safety pins and leftover velcro, attached the tentacles end to end, and wore them as a sash.

The morning was glorious – a thankful change from 2013’s ride gloomy, wet and OH SO VERY HILLY ride. Plus,  I was in far better shape this year. Now, don’t get me wrong – 60 miles on a bike is still, you know, 60 FREAKING MILES. But despite a strong headwind that seemed to come from every direction you turned, I kept up pretty well with the other riders.

Now look, I’m not gonna lie, here – I’m not the kind of person who enjoys wearing something ridiculous in public. In fact, I hate it with the passion of a thousand burning suns. I am an introvert by nature. I am a shy, retiring muskratty sort.

That said, if it meant $13,500 for charity, I’m definitely gonna be someone who’s down for a little personal humiliation and pain, ridiculous headwinds be damned. And honestly, for a duck, HOLY COW the flipping thing could have been a tad more aerodynamic. But it’s also very absorbent, as I learned to my regret in last year’s rains, so I wasn’t complaining too much.

The duck did NOT get heavier, with every passing downpour, this year. Nor did it then leak down my face for miles on end. For that, at least, I remain grateful.

I dropped about 15 lbs. over the course of training for the ride, this summer, and it felt great. TRAINING! Hashtag Iknowright? Even with all that, by mille 45 – the lunch stop, at the SURPRISINGLY HUGE en Ehr Farms – the headwinds were getting to me. Seriously, I’m no meteorologist, but I’d always perviously assumed wind to be a uni-directional kind of thing, not specifically out to get you personally.

By the way, it’s struck me recently that functioning adults – “grown-ups,” if you will – really shouldn’t use caps-locks as often as I do. BUT I DIGRESS.

The biggest mistake I made, training for the ride, was not getting on my actual bike enough, over the course of the summer. Popping into the gym to hit a Precor machine like a madman for an hour or two was great for my aerobic fitness and endurance, but did nothing to prepare me for the I AM NOT JOKING extreme butt-hurt that comes from long-distance biking. The last thing I wanted to do, after that amazing lunch, was to get back on that bike.

Fortunately, for the last 15 miles, Science and Logic prevailed and the insane headwind became an amazing tailwind, as the ride turned north again. Yes, I hurt. Yes, I was fighting off a leg cramp I knew would be coming. But I’m not sure I’ve ever had more fun on a bike than averaging 17 mph all the way home for such a stretch.

And of course, this being an athletic event in Wisconsin, something was waiting for us at the finish line.

Lots of folks remembered the duck from last year’s ride. Let’s be honest: it’s a hard thing to forget. I know. I tried. Often.

“Hey – you’re the duck guy, aren’t you?” someone would say to the man WITH A FREAKING DUCK ON HIS HEAD!

The tentacles were new, though, and the sash they made confused some folks, who believed them to be snakes or caterpillars, at best. Giant, giant mutant caterpillars. Still, the money raised was what people remembered the most, to the point where it was assumed I was a professional fundraiser. HA HA more fool them! I’m pretty much as unprofessional as it gets! SUCKERS!

Now here’s the thing. This week, the Lucca Comics and Games festival announced that I’d be a Guest of Honor at their 2014 show, in November. And they used a photo of me taken when I was last there, in 2009. And I gasped when I saw it. I mean, really gasped, literally and audibly.

Here’s me then, and here’s me now. Go on. Click on this for the full effect.

Am I gonna be doing more rides like this in the future? You bet.

It helps farmers. It helps low-income households, and 100% of your donations go to getting healthy, sustainable, locally-grown food to folks who need it.

And you’ve also helped me.

Thank you for that.

PS: I have a crazy number of people to thank and a lot of stuff to send out to my most marvelous backers and supporters, Thanks to David Michael of frogpants.com fame for volunteering to tackle fulfillment. That is a HUGE burden that lets me keep drawing and not mailing hundreds and hundreds of things out! Starting next week! Wheeee!