GUYS! The ONE GOOD DEED Munchkin postcards are at press! They come with a very special, Steve Jackson-sanctioned and official rule: Start a game of Munchkin at Level 3!

How do yo get one? Simply by pledging $15* or more (please pledge more, if you can) to my upcoming Insane Charity Bike Ride!

Wait. WHAT Insane Charity Bike Ride, you say? THIS ONE!

The postcards look great, and the only way you can get one is by pledging! They’ll all be signed by me. They have to be, to be valid. And if you backed me last year, you’ll be getting TWO OF ‘EM! 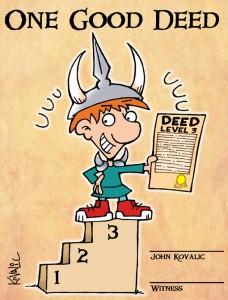 To say nothing of the fact that if we reach $5,000 in pledges, I do the ride with a Duck of Doom on my helmet again!

Getting to $5,000 will be tough – any and all help spreading the word is appreciated.

HELP HUMILIATE ME WITH A DUCK!

Anyway, you don’t just get a VERY RARE AND COLLECTIBLE, SIGNED MUNCHKIN POSTCARD! Oh, no, indeed.

Every time a $500 level is crossed, I’ll be sending  a free PDF of something to everybody who’s pledged anything, up to that point.

And if we pass that? Then the fun really begins.

BUT THERE’S MORE! At the end of the campaign, everybody who’s pledged gets a free download of my very geeky “EMBRACE THE SQUEE” coloring book – with new pages added just for this year’s ride, including some fabulous Guest Artists.

Look, if you can’t, no worries – I know money’s tight all around. But this is for a great local charity that I really believe in, and your donations do make a difference.

Proceeds from Bike the Barns benefit FairShare’s Partner Shares program, which helps local low-income families purchase local, organic vegetables and have a direct connection with their food and farm through community supported agriculture.

We’re riding to make sure all of our neighbors have access to fresh, healthy food!

Last year the Army of Dorkness (i.e., you all) was the main fund-raiser for the ride. This year I’d like to try and do even better.

GO UP A LEVEL!

PS: Super big thanks to DriveThru Comics for helping wityh all the PDFs!

* UPDATE: There was a type that had this at $10. DON’T WORRY! Everyone who previously pledged $10 will still get this.

** Update: WE HIT ALL THE MARKS! We passed $5,000! To celebrate, everyone will get ALL the pdfs, regardless of WHEN you pledged!