It’s an enormously busy summer. Sadly, it’s also mostly con-free. But by missing the Origins Game Fair last month, I did manage to have the best daddy-daughter day with Louisa I could possibly imagine. It included trips to the Farmers’ Market and the Zoo, a neighborhood block party and a Madison Mallards game, ending with the first fireworks she had ever seen.

“It’s like Cinderella’s Castle,” she exclaimed, as she danced and laughed to the pyrotechnics overhead.

I won’t be at GenCon this year, nor PAX nor Dragon-Con. Partly, I just want to be around my daughter as long as I can (she’s just over two-and-a-half years old, and every moment with her seems to be made up of pure magic). But then there’s the fact that I’m enormously busy. The latest giant Munchkin project is in the bag, and I now play catch-up with all the things I’ve let slide a bit. (Hint: you’ll always be able to tell when I’m busy, as I tend to run cartoons as utterly stupid as yesterday’s.)

Now, if YOU’RE going to go to a con – saaaaaay, the North American Discworld Convention, right here in Madison, WI – then you’ll likely be one of the first people to pick up the Munchkin Discworld one-off promo card. It was an idea I had, and fortunately, the stars aligned, and Steve Jackson’s people got in touch with terry Pratchett’s people, and, long story short…ta-DAH! 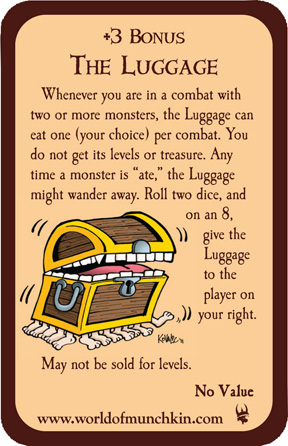 The full story of the card, and when and where it will be available, can be found here.

An EXTREME closeup can be found here.

Yeah, if you think I was thrilled to draw an official, licensed version of Conan the Barbarian, you can probably quadruple that for sheer geek fanboy joy I got from drawing one of Sir Terry’s characters.

PREVIOUS RAMBLINGS: HISTORICON AND ON (PAGE)