Muskrat Ramblings
“l hit you on Youface. But you’ve got to promise to fingertag me back”…
posted by John

My Facebook page, http://www.facebook.com/johnkovalic, recently hit 5,000 “friends.” And as facebook will readilly tell you, you can’t have more than 5,000 friends and be a real person. No, sir – you need to be a corporation, celebrity or monarch.

(I am not making the “monarch” thing up. It may be a Facebook joke. It probably is. But, frighteningly, IT MAY NOT! That’s just how Facebook is, anymore.)

Anyway, as a slew of other folks wanted to join the fun, so today, I took the plunge and turned my Personal Facebook Page into a Corporate/Celebrity/Monarch page.

If you were a “Friend” before, you’ve been automatically transported over to the new page…whether you like it or not!

(“Whether you like it or not,” by the way, would be my entry if Facebook ever had a “Create our new motto” competition).

If you weren’t my “Friend” before, well, now we can never apparently be friends ever again. Ever. At least according to Facebook.

By the by, my very first post on the new Facebook page had a pretty awful typo in it. Which (a) is par for the course, and (b) what with Facebook being Facebook I can NEVER EDIT OUT, EVER means there’s no better time than now to plug my “TYPOS HAPPNE” t-shirts…in both Men’s and Ladies’ cuts. 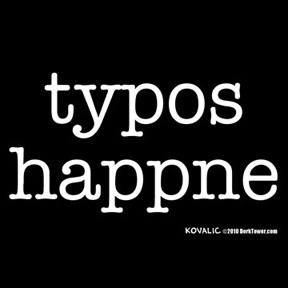 No Origins or Gen Con for me, this year, I fear. With all the work to do, plus the generally feeling that I lost control of things these last eight or nine months, I’ve made the decision to just stay home and work.

And, you know, play with my daughter.

Possible new toy, in the My Little Cthulhu line: “My Little Geekthulhu.” 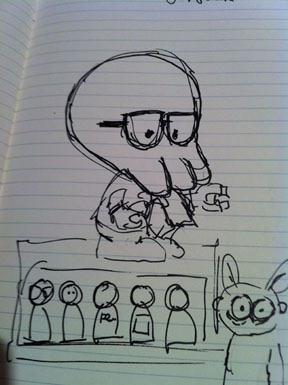 Each Little Victim would be its own geeky archetype. Though how I’m gonna covince Dreamland Toyworks to let me add bunny ears to the Fuzzy Victim, I’m not figured out, yet.

So. Basically. Imagine THIS guy… 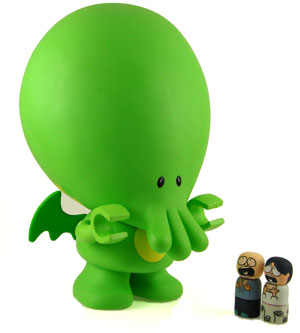 With glasses and pocket protectors.