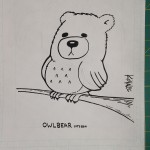 More Inktober! Today’s Inktober sketchy sketch – the dreaded OWLBEAR! Fear it! FEAR IT! Or should that be “Inkto-BEAR” ha ha ha ha see what I did there? Also, yesterday’s Inktober sketchy sketch: nothing against the good people of the Mattel corporation, who do great things with Apples to Apples, but nobody there seems to “get” how to draw the […] 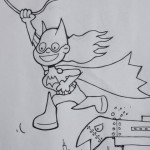 Inktober Day 1: Morning warm-up sketch. Gilly as Batgirl. I made  couple of small mistakes on this one (FAKE GEEK GUY!), but that’s why they call it a warm-up sketch! I wanted to try and capture sheer joy on Gilly’s face. Adding the grimacing gargoyle-like Duck-of-Doomish thing below here was an idea at the end. What’s Inktober? It’s […]