Hard to believe (I keep double-checking my calendar), but just last week, I was in Poland, guest of the wonderful Pyrkon gaming and media convention.

Pyrkon is big – really big. 40,000 attendees big. It’s the largest such convention in Poland, by far, and this was my second trip there, thanks to my wonderful friends at Black Monk Games, the Polish translators of Munchkin (and soon, Dork Tower!)

The three-day convention was a whirlwind, for me, full of demonstrations, talks, and one-hour signings that turned into three hours.

It took five flights to get to Poznan, the city where the convention is held, every year: Madison – Detroit; Detroit – Amsterdam; Amsterdam – Kraków; Kraków – Warsaw; Warsaw – Poznan. (If this seems insane, it sort of was: Delta doesn’t fly into Poznan, but I get upgrades with them so frequently, it’s the only way to cross the Atlantic – what with me being 6’4″ tall, anyway: I value my spine).

Apparently it was King’s Day in Holland, and there were many orange treats at the Amsterdam KLM lounge: fun, tasty and colorful. 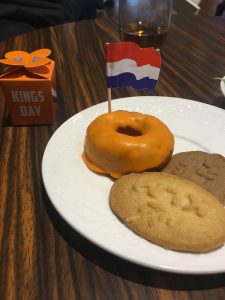 A five-hour layover in Kraków gave me a chance to pop into the city, which everyone says is beautiful. I didn’t see it, because I wandered in all the wrong areas. A few days later I’d pay for my foolishness! But for now, a student diner satisfied me my pierogi and borscht fix. (This would become a leitmotif of the trip: a delicious, carb-heavy leitmotif). 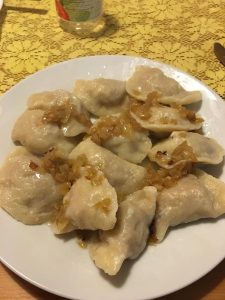 My Dad’s side of the family comes from Slovakia (back in the day, I could brag of Czechoslovakia, and lay some small claim to Prague, Bohemia and Charter ’77 – now, not so much). So coming face-to-face with my Buba’s cooking every day I was in Poland was a calorie-laden delight.

The long Krakow layover was so I could change from Delta/KLM to LOT, the Polish national airline (I had booked this leg as a separate ticket). I grew to love traveling on LOT a lot. They didn’t hand out tepid pretzels, oh no: they had a basket of candy you could grab from. It was Easter every flight! (Someone from Poland want to bring or mail me FRUGO candies? I may be addicted to them). 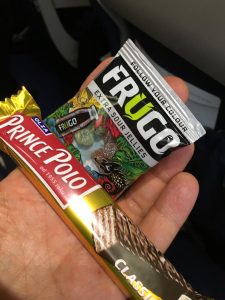 But back to Pyrkon: yes, it’s flipping’ huge. Held in Poznan’s World Trade Center – Poland’s largest convention center – it spans many massive halls. The dealer area seems to have doubled in size from my last trip, two years ago. 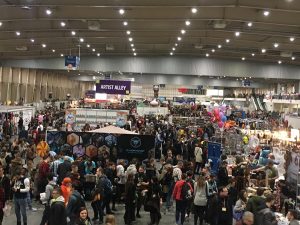 The signings at the Black Monk booth were decidedly intimidating, though having a massive queue is probably the best possible problem a cartoonist could have. 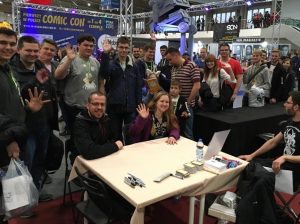 I’m guessing I drew over 100 cards, over the course of the weekend. One upside to this is that it improves my flash-caricature skills somewhat… 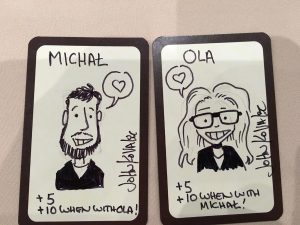 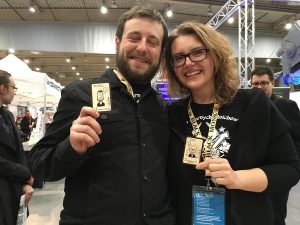 Another delight was when an eight-year-old girl left room in her comic book (about a cat and a dog who save the world) for me to add in Spyke, from Munchkin. I hope I did the tale justice! 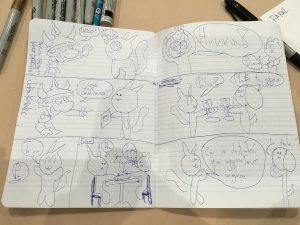 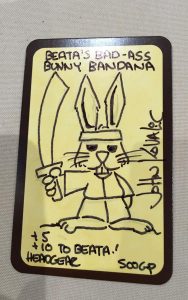 And, look: not gonna lie: seeing Munchkin cosplayers in full regalia is always a thrill (to say nothing of humbling). 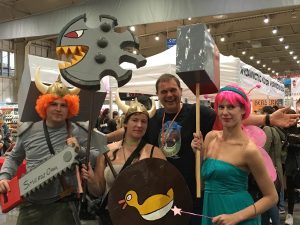 It was an exhausting but exciting show, but I did get a chance Saturday morning to pop down to Poznan’s city square – an achingly beautiful place, spiffed-up by Italian architect Giovanni Battista di Quadro, during the Renaissance. 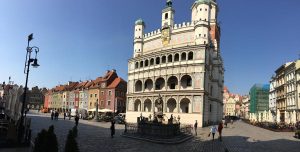 Sadly, I didn’t get much of a chance to hang out with artists such as Wayne Reynolds, Ralph Horsely and Milivoj Ćeran, who were also guests. My loss, as they’re all great guys, and ridiculously talented, to boot. I’m hoping I at least get to see a couple of them again at UK Games Expo next moth. But I had to leave for my flight Sunday afternoon, and didn’t get a chance to say goodbye.

My Poznan hotel was about a block from the con site, but more importantly next door to a restaurant that literally translates to “Pierogi Hut.” I thought these were some of the best I’d ever had, until my return-layover, in Kraków again. This time, I had two full days (and three evenings) to explore. Yelp had recommended a small cafe next to my Kraków hotel, and the mushroom pierogi were without question incredible (“pierogincredible”?) 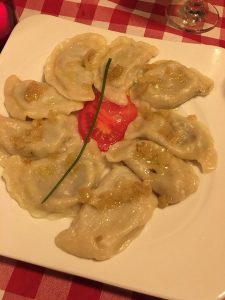 The next morning, I wandered through some more dreary sections of Kraków, wondering what all the fuss was about (I am a dum-dum), when I finally stumbled across the Old City – an absolutely crazy-beautiful area that left me slack-jawed. 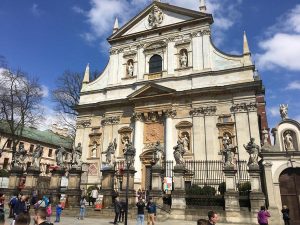 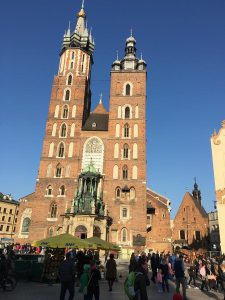 Staring up at this indescribably lovely architecture, I did indeed stumble, missing a paving stone, twisting my left ankle and falling smack onto the cobblestones with my right knee. I’m not sure what sound it made, but I wouldn’t be surprised it if was, indeed, “krakow!”

By the end of the day, my knee had swollen to the size and color of a really large golabki, and walking had become almost literally impossible: I could only return to the hotel leaning heavily on my mum (my parents had popped over from London to visit, fortunately). Thus my last day in this magnificent place was spent staring at the walls of my hotel room, my leg up, my body aching, and me feeling more than just a little bit stupid.

The plus side, though, was I did get to see Kraków for a day, and it’s definitely a place I’d enjoy returning to, one day.

What say, Pyrkon – let’s do this again soon, eh?