Gen Con: the best four days of not seeing even an eighth of the friends you’d love to have seen…

Yup, Gen Con 2016 is in the books, and it was a wild, crazy, insane time, with huge crowds, giant lines, and a total lack of sleep. And that’s just fighting for a Delta flight home! Ba-dum-kshhhh! I’ll be here all week, folks!

(Actually, I did make my Saving Roll vs. Airline Meltdown, leaving Indianapolis Sunday morning. Never been so glad to leave Gen Con early.)

Still, yes, totally insane, as Steve Jackson Games celebrated Munchkin’s 15th anniversary. The signings were crazy busy, and it was fantastic meeting so many Munchkin and Dork Tower fans. It was also great being able to hang out with Steve Jackson hisself for an evening, and scheme schemes over sushi.

A convention highlight for me was watching Eric Lang pick up the well-deserved Diana Jones Award for Excellence in Gaming at Wednesday night’s DJA party. There’s literally nobody more deserving than Eric. So here’s a pic of him giving a halfling ranger a wedgie. You’re welcome. 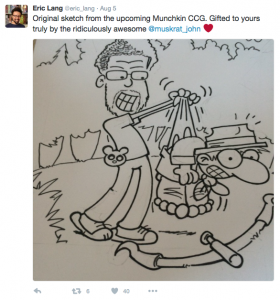 Speaking of inappropriate sketches: a stupid idea that hit me at the Munchkin Tavern, Possibly for a Star Munchkin expansion, I think. Or at the very least the Ashcan of History. 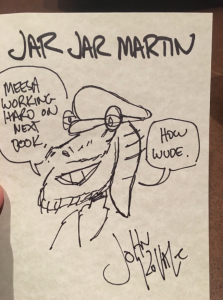 I got to see and play Cthulhu in the House for the first time. The CMON art department did an outstanding job with my silly little drawings. It looks and plays great. It was also one of only three games I got to try all convention long. (The others were a demo of Bottom of the Ninth, which was terrific, and Dead of Winter, which kept me up until 2 am, a rookie mistake).

Signings with my good friend and co-conspirator Munchkin Tzar Andrew Hackard, as well as the brilliant Len Peralta were other highlights. As was filling my suitcase with so many minis gaming goodies that I had to baggage-check a Battlefoam Flames of War carrying case on the flight home.

Most of my time was spent at meetings or signings. I scraped together a few hours to walk the floor, but business meant I had to pull out of a Geek Dad True Dungeon group delve again. But there are worse problems to have in this biz than being ridiculously busy. And fortunately, I had Business Manager Alex looking after me all along.

Looking back, it’s crazy how many good friends I didn’t get a chance to see. All my cartooning pals, for a start. But I feel fortunate I had a chance to hang with a few buddies.

And now…I sleep for a few days.

PS – Please excuse any typos. I’ll get to those when I wake up…