Every now and then, I find a little time to do something that’s not Munchkin. When I do, it’s usually Dork Tower*. But very so often, I get to play in another sandbox entirely.

Last year, I was flown to Brazil for Comic Con, and got to hang out with some of the folks behind Cool Mini or Not. (As well as signing a ton of Munchkin stuff and Kobolds Ate My Baby stuff in Potruguese, and drinking as many room-service Caiperhina’s as I deemed appropriate**).

Anyway, we started talking, and a couple of super-neat ideas bubbled up. One of them was CTHULHU IN THE HOUSE. 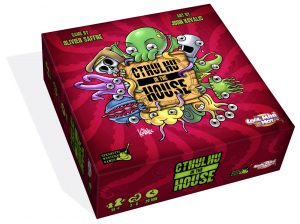 Cthulhu in the House is a nifty, small, fun game that’s based on Rumble in the House and Rumble in the Dungeon, it adds Portals to the game system: you can either Move or Fight, trying to keep your identity secret and be the last one standing (or flying, or hovering, or leaving a slime-trail. You get the idea).

It also allowed me to revisit the Cthulhu Mythos. Ia! Ia!

In the past, whenever I’d work on a new Cthulhu game (Creatures and Cultists, Munchkin Cthulhu, Unspeakable Words Deluxe Edition, and Pairs, to name a few), I’d try and reinvent the wheel, coming up with different takes on the horrors of HP Lovecraft’s pantheon.

With Cthulu in the House, though, I tired of all that. I mean, it’s not like I try and redo Spyke and Flower every time I draw Munchkin. Nor do Matt, Gilly and Igor get rebooted any time I pick up the pen for Dork Tower.

So why try and come up with an all-new Cthulhu every time I tackle the Mythos? I was kind oif pleased with where my work was, after finishing Unspeakable Words and Pairs. I liked how these guys looked. I didn’t want to redesign ‘em, any more.

And here are just a few of them!

In the end, it was hugely fun redrawing, but not reinventing, creatures I’ve tackled in the past. I like the direction they’re going, and I like the overall look of the beasts, elder gods and monsters. It felt like visiting old friends (evil, EVIL old friends), and I can’t wait to draw them again, next time I’m tasked with bringing Cthulhu to comic gaming glory. Or something.

I’m really happy with the art, and the Cool Minis or Not folks have done a splendid job with the art direction and colors. They were hugely fun to work with, and now I see why so many of their releases are top-notch. When you stuff a company full of creative, professional, fun folks, Gaming Goodness is sure to follow.

Cthulhu in the House will be premiering at Gen Con, where I’ll just happen to be, next week. And, of course, we’ll be playing it at Drokstock, a teeny little division of Gamehole Con.

Anyway, that’s one of the Cool Minis or Not collaborations that came out of my Brazil jaunt.

What’s the other, you ask?

Can’t talk about it, yet…but it’ll be even cooler!

* I’m actively working on ways of increasing my DORK TOWER time, by the way. More on that later.
** A lot.