I’m pretty much feeling 100% better. Thanks for asking. But I’ve an appointment with the surgeon Wednesday, and await his official verdict. I haven’t seen him since I was wheeled into surgery, two weeks ago, and I sort of want to greet him with “So you’re the sonofabitch who knifed me!”

But I probably won’t.

Observation: there is precisely one “Gall/Gallbladder” joke.

I have heard it many times, in the past two weeks.

The last couple of evenings, I’ve been painting some 25mm minis for an upcoming D&D 5e campaign. Or rather, repainting old minis from college. 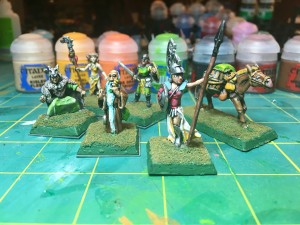 I’m not sure who made the minis. I’m guessing Ral Partha. I should have taken “before” photos. I probably also should have stripped the old paints off the minis (note the less-than smooth surfaces). But I went into the project thinking I’d only be touching up some mediocre old paint jobs, not redoing them entirely.

I’m rusty. Out of practice. But I’ll get back to where I was, 10 or 15 years ago or so, when I was able to paint stuff that turned out like this: 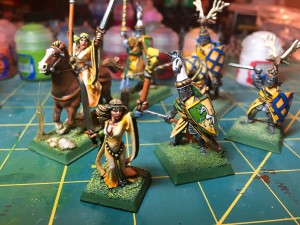 They’re no “Golden Demon” award-winners, but I was really happy with them.

I’ve missed the painting part of the hobby badly. I almost forgot how relaxing it can be. I need to make more time for it. The trick to getting better is simply to keep painting. Case in point, the first minis I ever painted: school, in the late 70s: 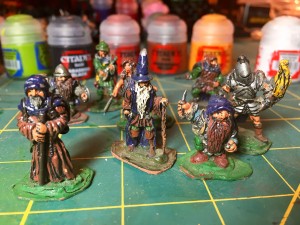 I used enamels on these. Not sure I knew anything else was available, back then. (And no, I’m never repainting these. Wouldn’t dream of it. Not sure I’d even rebase them, from the pink cardboard bases I cut out for them, thinking it was a good idea at the time.)

I’d listen to Elvis Costello, the Jam, the Boomtown Rats and the Police while painting minis, back in the day. I still may be the only person who reminisces about of Advanced Dungeons and Dragons First Edition in general, and Asgard miniatures in particular, when listening to the album “Get Happy.” I’m not sure that’s what “Love for Tender” intended.

One day, I may even get back to being able to make stuff like this, again: 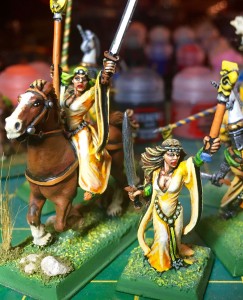