This post may be a bit more rambley and random that normal. Please be forgiving of any typos. I’m on some super-strong pain medication, and the last 48 hours have been…interesting.

Cut to the chase: I’m sadly not sure how much time I’ll be able to spend at GameHoleCon the weekend. I’ve also had to cancel my trip to London next week.

Monday night, you see, as I was putting Daughter, Age 7, to bed, I started getting what I believed to be a bit of indigestion.

Within a couple of hours, this had grown into perhaps the worst physical pain I’ve ever experienced.

Judith was running some errands, and I thought I could tough it out. By the time she got home, though (around 9 pm that night), I was in bed in the fetal position, whimpering, worried I was either having another gallstone problem, or, worse, a heart attack.

(Yes, I know the positioning of a heart attack would be quite a bit North of a gallstone problem. But my sense of panic was beginning to become acute).

Anyway, in short notice, thanks to my pal Dory, I was soon in the Emergency Room at the UW Hospital, with people prodding and poking. And with me tweeting. Because, why not?

Hey, gang – I was admitted to the Emergency Room last night in great pain. Spent the night at the hospital. Very little sleep.

By midnight, I was hooked up to an IV, and liquids were being pumped into me. By 1 am, the doctor on call informed me she’d consulted a surgeon, and I was scheduled for a gallbladder operation.

Apparently they now remove your gallbladder through your belly button which is way gross but also kinda Ancient Egyptian and cool… — John Kovalic (@muskrat_john) November 3, 2015

Drugged, and with the pain down from a “9” to a bearable “3,” I spent the night at the hospital. The operation was scheduled for 9:30 am, and I had a comedian for a surgeon.

Twelve hours after getting to the hospital, I was being strapped to an operating table by about a half dozen folks and not in any sort of sexy Penthouse Letters (Google it) kind of way.

Then the anesthesia hit. The sedatives must have been heavy because I could swear I hallucinated that a front-running presidential candidate claimed that the pyramids were only built for grain storage.

Good news for everybody! I’m out of surgery, it went well, and the anesthetic finally seems to be flubbber blipple smershish blip. — John Kovalic (@muskrat_john) November 3, 2015

Also, I could eat again, for the first time in 17 hours. My choices were restricted, though. Possibly related: did you know Orange Protein Jelly may be the worst thing on earth? At a very minimum, it qualifies as a Dungeons & Dragons monster.

I went a bit mad on Twitter, but in all honesty, it helped keep my spirits up. Feedback from friends and followers also buoyed me, and the time passed quickly. (Sorry I wasn’t keeping folks updated here or on Facebook, but honestly, it was just plain easier to Tweet than to blog. I could do it horizontally, which is also a plus.)

I can go home tonight if I demonstrate I can walk and pee. Watch me impress the doctors by doing both AT THE SAME TIME! — John Kovalic (@muskrat_john) November 3, 2015

So, there you go. I’m not gonna complain. Many great friends have gone through far, far worse, this year. I was lucky. They found something that could have been much, much worse. Apparently it’s called a “Hot Gallbladder,” and while it’s nice to know something about me was actually hot, it’s nicer still that it’s gone, and shouldn’t bother me again.

Home, snug in my own bed. Thank you, Twitter friends, for really brightening a sucky day of surgery. pic.twitter.com/tX4FFBbdmM — John Kovalic (@muskrat_john) November 4, 2015

Fortunately, I have fun, weird friends, who send me stuff to make sure I am a happy, happy ket.

Lar DeSouza sent me a Get Well card, featuring the Gallbladder Fairy. 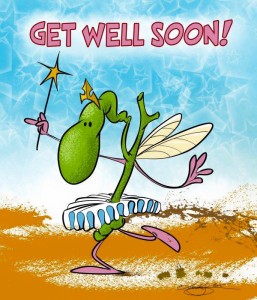 James Stowe wasn’t so kind to the vile organ. 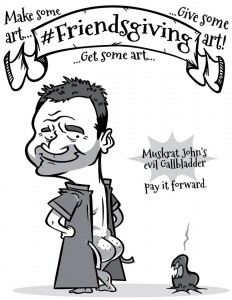 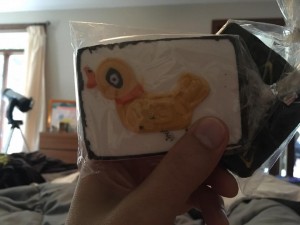 So I hope, hope, HOPE to get to GameHoleCon for at least a little bit – I have two events scheduled, and a ton of my friends from around the country will be there. But people keep telling me “take it easy, and get rest. No. Seriously. TAKE IT EASY! Don’t be stupid.”

I’ve got so many more things to talk about, but another round of painkillers are kicking in.