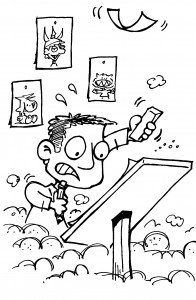 Here’s the deal: I’m getting things under control.

They haven’t really been out of control. Not for a while, anyway. But I’m getting them under even more control.

Not that you’d think that, by the amount of Dork Tower strips and blogging you’ve been seeing – or rather, not been seeing – on these pages since the start of the new year.

I’ve got a new way of working. I’ll talk about that more, soon. But it’s literally doubled my output these last four months. More than that, it’s calmed my work life enormously. Possibly my last post made it sound like I was leaping from Emergency to Emergency, when in reality everything was well in hand. Projects got done, emergencies were handled. I completed the eight-week project I was given two weeks for without busting my arm up again. This was a Good Thing.

Getting strips online, regularly, though, is the final goal here. Right now, I’m working on building a two-week backlog before bringing Dork Tower back to three-times-a-week status. And I’ve already built up a two-week emergency reserve of strips, for those times when the gaming biz gets crazy.

I’m talking with some very talented folks who’ll be doing Guest Weeks at Dork Tower, making sure these are scheduled well in advance.

And I’m even chatting with some folks in France, Italy, Germany, Brazil and elsewhere, about translating the comics, and running them in their respective countries, once they get going again. (One point of discussion: whether it makes more sense to host all translations on one site, or have the individual companies hosting their own sites).

Anyway, there will be a lot going on, I hope. Following me on Twitter or Facebook will be the easiest way to keep up with developments, in the short term. Or just keep popping back here, from time to time.

Thanks again for your patience. The team and I are working really hard to make sure Dork Tower online will be done right, this time! Or, at least, as Right-er as I can get it…