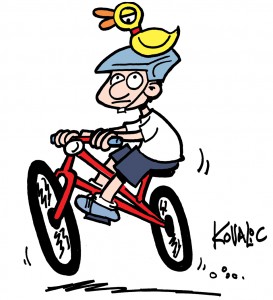 HEY, Muskrat-Boy, what’s the deal with those fine postcards? And what’s going on with that Insane Charity Bike Ride of yours?

I’m so glad you asked!

With two-and-a-half weeks to go until the Bike the Barns ride (eek! eek! eek!), we blew past the original goal of $5,000 raised! However, overall fundraising for the ride – which collects needed funds to bring local farm foods to low income families – seems down, this year.

So to put some undue pressure on myself, I upped my personal Team Muskrat goal to $7,500. Which, I’ll admit, SCARES THE HECK OUT OF ME! Even more so than doing a 60-mile ride with a duck on my helmet again (which I am now obligated to do, because we passed that pledge level weeks ago.)

But I think the new goal is do-able.

And since everyone’s been so generous, here’s what I’ll do:

I’m saving all the downloads until after the ride, because now EVRYBODY who pledged (and who will yet pledge) gets EVERYTHING. The SADDLE-BAG OF HOLDING! At the moment, that includes the pdfs of:

I’m trying to line up some more pdfs and fun from friends – fingers crossed!

ALSO, if you pledge $15 or more (though please pledge more, if you can)  I’ll send you the ONE GOOD DEED Munchkin postcard, letting you start a game at Level 3, thanks to Steve Jackson Games! I’ll mail these anywhere in the world. And YUP – the cards are in, and done, and I should start sending them out in a couple of weeks. This may take some time, as between this year and last yer, there have been hundreds of pledges. But WOOOOOT! They’re in!

ALSO, five other non-top pledgers – chosen at random – will be getting original card art! Because that just seems fair.

ALSO, if you pledge $200 or more, regardless of whether you’re a top bidder or not, I will make darned sure you get a piece of original Munchkin card art. Because we’re less than ten such pledges from the $7,500 goal! And I really want to hit this goal for Bike the Barns!

LASTLY, if we DO make the $7,500 goal, not only will I wear the Duck of Doom on my helmet, but I’ll also do the ride with a couple of Steve Jackson Games plush tentacles wither on my helmet, on my jersey, or whever I can fit them on the bike. Ia! Ia!

Anyway, I’m down ten pounds – I’d like to be another five or so down, by the ride’s start. Which is a turnaround from last year, when I didn’t get train for it at all.

I AM SERIOUS ABOUT THIS LOOK HOW SERIOUS I LOOK!

Please do consider pledging, won’t you?

PS: Can’t make any promises on this, but I’ll take a look at the pledges that come in from around the world. If YOUR COUNTRY ranks top, after the US and Canada, I’ll look VERY, VERY hard into attending a convention there in 2015 or 2016.

PPS: DANE COUNTRY AREA CYCLISTS – there are still a few spots open for the Bike the Barns ride! This is a TERRIFIC ride, for a GREAT cause! Check it out!