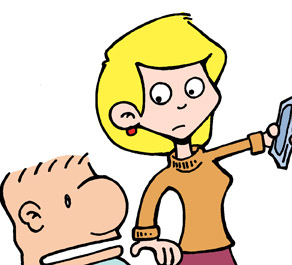 “First Dork Tower in over two months,” noted one tweet, ecstatically, when today’s strip went up.

Boy, oh boy, did I hate seeing that.

I never meant to take time away from the strip. But things got busy this summer. Very busy. I mean, like “last five minutes of Iron Chef America, where the secret ingredient had to be slaughtered by the chefs at the start of the show, and trust you me, it was messy – you better believe that took time” busy.

Here’s an example of how overcommitted I became: Why just last week…

To be fair, we’d never said anything about new art for Kobolds Ate My Baby: In Color!!!, and it was never expected. The new edition was supposed to re-use old art, but in – you know – color. Still, when I saw the proofs, my skin crawled. The line quality of the work I did years ago was atrocious, and I thought our readers deserved better.

So on top of everything else, I begged Chris and Dan to let me redraw and recolor an. Entire. Book of. Kobolds.

Other big things were happening: ROFL!’s reviews were amazing, and out of the blue I found myself having to do a ton of publicity for it. This ate up almost an entire week. Another huge surprise project (having nothing to do with anything else) popped up right after GenCon, and swallowed two more weeks of work I could ill-afford, making the fortnight frantic (fortunately cooler heads prevailed and decided to push this yet-to-be-announced project back to a later, more sensible date).

I could go on. And on. And on. Like an editoral cartoonist still using that damn Energizer bunny as a metaphor 20 years after it stopped being a thing, damn, could I go on. My head felt like it was going to explode. The nights were late. The mornings early. Some whiskey may have been consumed.

Sadly, with so much happening, Dork Tower got pushed further and further down the priority line.

Which is wrong. Look, pretty much everything I do, work-wise, on a daily basis, is a blast. I am ridiculously, ludicrously, unimaginably lucky to be in the position I find myself in: professional goof-off. But I take goofing off seriously. And I take Dork Tower and Munchkin most seriously of all.

I juggle a ton of things – different, fun, interesting things – on a daily basis, but my chewy center is all cartoonist. I can go months without writing, or without serious game design, but I can’t go without sketching. I just can’t. There is nothing (outside of family and friends) that makes me feel so happy, so incredibly, joyously alive.

The problem is, slowly, over the last year, Dork Tower has become a hobby, for me. Because I’ve been so fortunate in other areas of my work, I haven’t felt the need to (Ugh! Ugh! Ugh!) “monetize” dorktower.com. There’s no store, no donation button, no ads, no sponsors. New Dork Tower strips bring in no money. Yes, I could put some more comic books or collections out – and I will. I have enough web strips for two or three more compilations. But I don’t want to release anything else until The Collection That Is Not To Be Named is out.**

I have no answers, at this very moment, in this very blog post. This is just the start of my personal exploration of what my art and my comics mean to me, and where I go from here. I’ll probably post more such ramblings. You all have the right to know where my mind’s at, on such things. You’re all part of this, too.

At the very least, though, the Dork Tower comic strip has to stop being my hobby, and get back to being my profession. Or – more accurately – part of my profession. A significant one. Up there with Munchkin.

That being, a professional goof-off who is very, very sorry he let you down. And who is trying to think of a way to ensure this never happens again.

* It also represents a profound lack of foresight. As successful as the Kobolds Ate My Baby Kickstarter was, imagine if we had used all-new art as a stretch-goal. Think we could have broken $100,000? ‘Cuz I do.

** You know, the one that was supposed to be out a few years ago? Yeah. THAT one. That’s the next thing I’ll release. And there are plans and strategies and things in the works, but I really don’t want to talk about them – I’ve talked them to death before, and given approximate dates before, and made personal deadlines that have passed before. So, no more talking until that’s DONE. And once it is, you’re not gonna get me to shut up about it.