Muskrat Ramblings
And now, a note from Monica
posted by MONICA

Over the past, few weeks there’s been a lot going on behind-the-scenes at Muskrat Central for one purpose and one purpose only…

…to offer you MORE Dork Tower.

Occasionally, you’re going to get some updates from people that aren’t John – LIKE ME, MONICA! – about what he’s up to or his work, because he’s busy drawing at his table. So, without further adieu, I shed my cloak of invisibility to drop some hints about what’s coming up.

You might have seen John’s previous post about The Perky Summer Sale. If you haven’t picked up a digital copy of the earlier Dork Tower releases, We’ll be doing more stuff like this, and soon. John’s been working with the folks at DriveThruComics to get his back catalog online — just in time for the fifteen-year anniversary of Dork Tower. 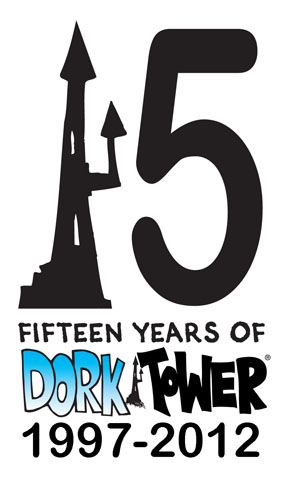 Before we can start celebrating that, however, there’s another little milestone that’s just around the corner. Hard to believe, but this year is the ten-year anniversary of Munchkin!

Speaking of the Munchkin anniversary, Steve Jackson has posted a behind-the-scenes look into the changes Munchkin Czar Andrew Hackard has made over the past year. It’s a good read and talks about how the game has changed. Check out One Year of Color Munchkin.

Personally? I just want the Munchkin shot glass… For milk, of course!

We’ll keep you posted about the Munchkin happenings when we get a little closer to the last week of July.

That’s all I have for today. Excuse me while I– Hey, CARTOON BOY!… Who said you could be on Twitter? Did you finish the strip yet?

Yeah, I’m a slave driver. But this next strip’ll be sooooooo worth it.

Have a great day!