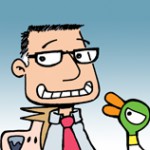 The Dork Store Commeth A lot of folks have been asking me to add a Dork Store to the website. And when I say “a lot of folks,” I mean my mom. And Business Manager Monica, although sometimes I get them confused. But selling things is important to Monica, because, let’s be frank: she doesn’t […]

Remember THIS Dork Tower? So, apparently, the BBC owns the trademark on Police Boxes, or somesuch. Meaning I can’t make anything with CthulWHO and the Police Box unless it’s licensed officially. Which seems like a bit of a long-shot, let’s be honest. That being the case…how would you like a download of the CthulWHO […]

OK. A small bit of explanation here. Apparently someone with a Pinterest took this DORK TOWER comic and made THIS with it.

Anyway, I’m all for folks playing with my stuff, but I’d rather it didn’t look awful – and that there was attribution – before they go mini-viral, which this has. It’s gotten thousands and thousands of shares on Facebook, alone.

Anyway, that cat is really and truly out of the bag, but I thought I’d re-do it, so that at least there’s ONE version that looks a bit better. And which I may be able to make T-shirts of. 🙂

So go on – share away. With THIS one, anyway!