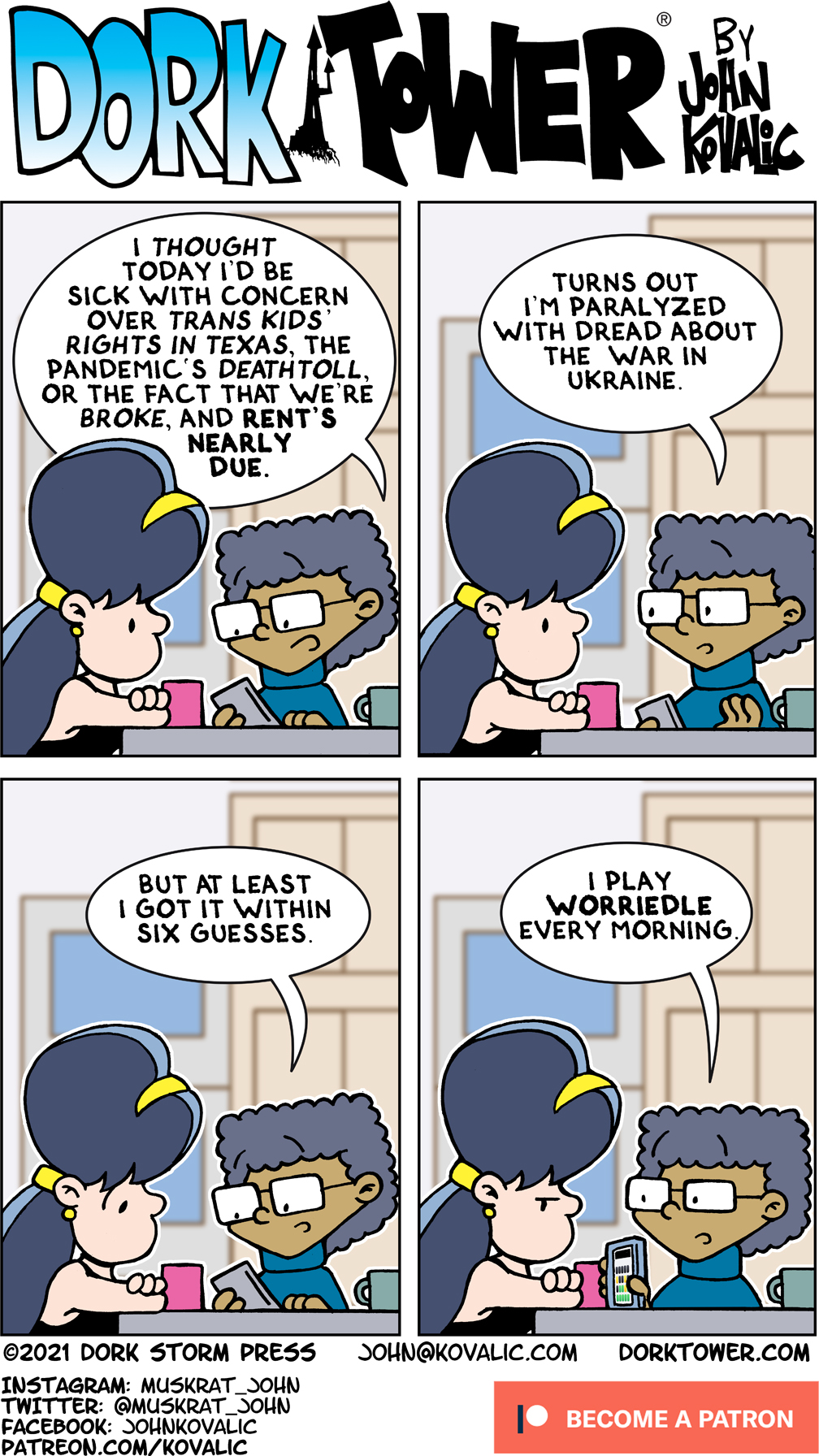 DORK TOWER is updated three times a week, thanks to its generous PATREON supporters! Enlist in the Army of Dorkness today, and help make that FIVE times a week!

Want this (or any) DORK TOWER strip as a signed, hight-quality print? YOU’RE JUST A CLICK AWAY! 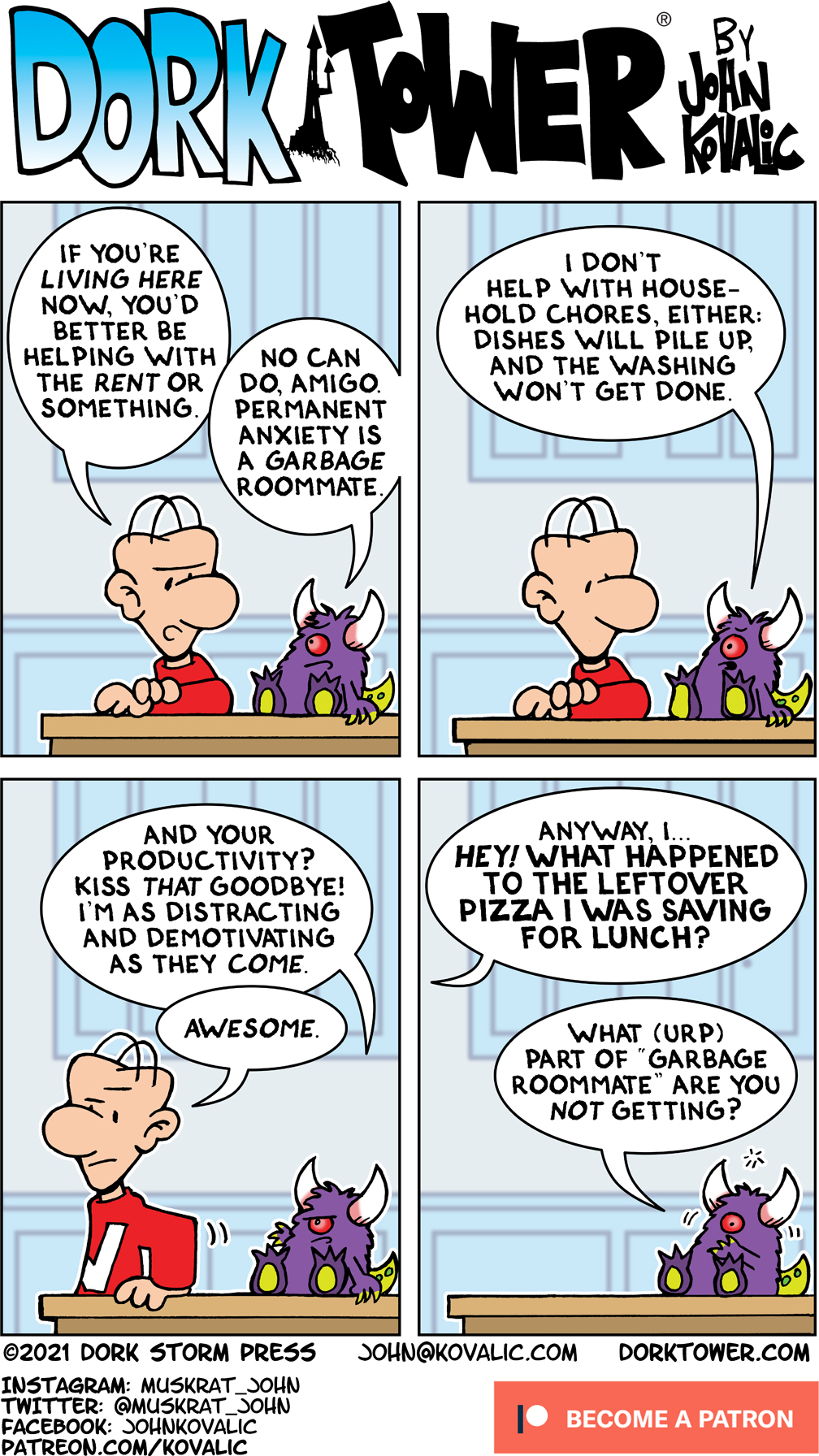 Want this (or any) DORK TOWER strip as a signed, hight-quality print? YOU’RE IN LUCK!

DORK TOWER is updated three times a week, thanks to its generous PATREON supporters! Enlist in the Army of Dorkness today, and help! 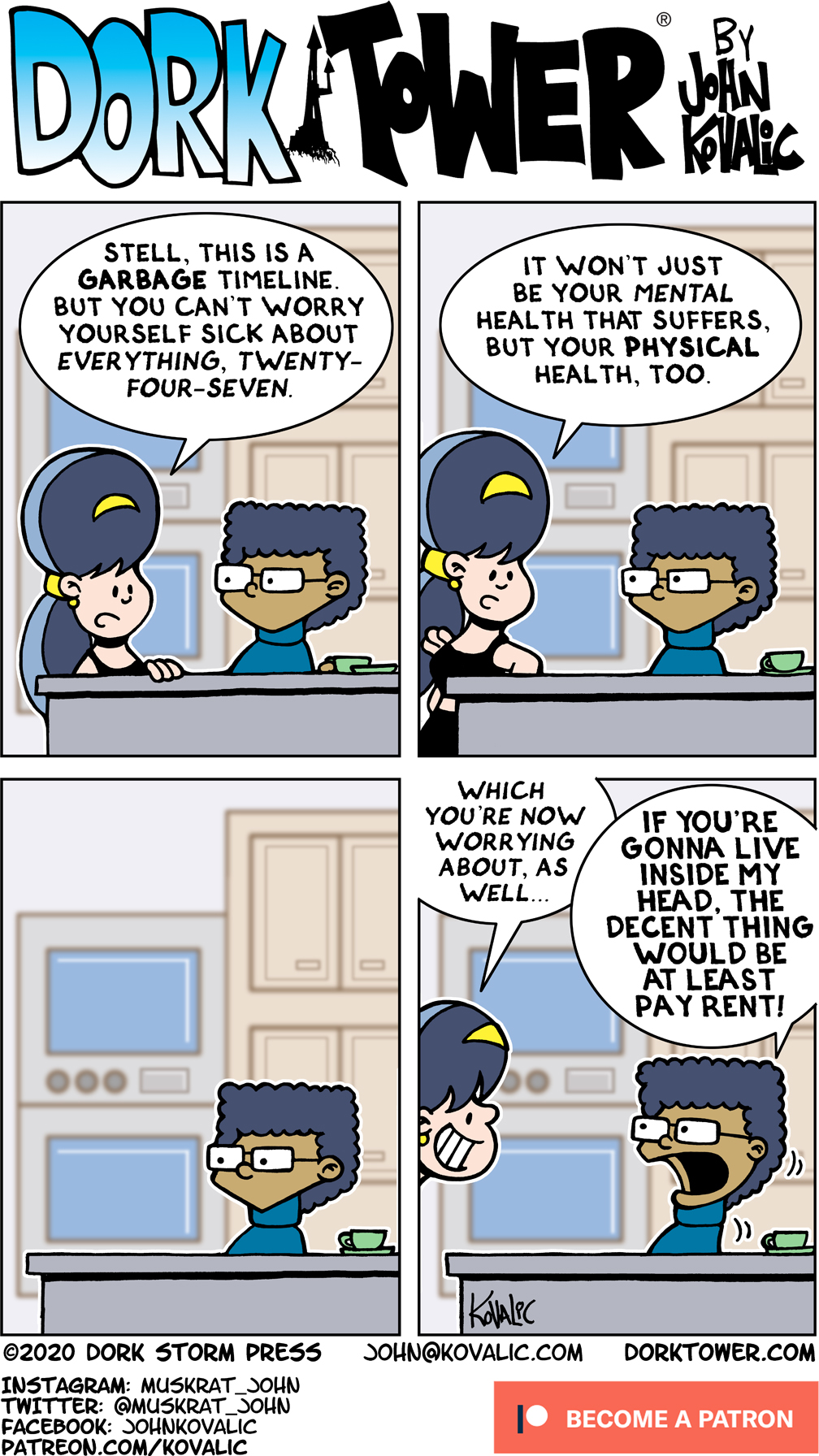 Dork Tower is updated Mondays, Wednesdays and Fridays, thanks to its amazing Patreon supporters. The next goal is four strips per week. Join the DORK TOWER PATREON, and help bring more Dork Tower to the world (you also get swag, our eternal gratitude, and more)! Even a $1 pledge helps!

No, I’m not entirely sure why I chose to throw a Radiohead reference into a strip. I do enjoy the band – often, a great deal. I fully believe “The Bends”/”OK Computer”/”Kid A” form a back-to-back-to-back release trilogy of a brilliance that rivals Elvis Costello’s “This Year’s Model”/”Armed Forces”/”Get Happy” or the Beatles’…well, pretty much any thre Beatles albums in a row, honestly.

You know those moments you never forget, all your life? Well, one happened to me, around 11 or so years ago. The lovely and talented Judith and I were driving north, on the four-hour trek between Madison and her parents’ house, for Christmas. I was driving, Judith was asleep. It was a frigid, clear, winter sky, and the northern lights oscillated wildly. The opening chords of “Everything In Its Right Place” – the opening track of “Kid A” – started…and in an instant, the night became magical.

There is possibly no better way to listen to “Kid A” than with the northern lights dancing ahead of you, and the rest of the world seemingly slumbering.

I kind of switched off of Radiohead for a while, with “Amnesiac” and “Hail to the Thief,” but I quite liked “In Rainbows,” and I’m enjoying what I’m hearing from “King of Limbs.” (“HI THERE, Sirius XMU! Long-time listener…”)

Judith, however, likes to refer to Radiohead as “Whiny British wankers.” So, honey…this strip is for YOU.

And now, here’s Radiohead, playing the Smiths. (I think this is when I started liking them again).

Muskrat Ramblings Igor needs our help! posted by John I hope that those times when I really ask for your help are few and far between. I also hope that, for the most part, when I ask for a Tweet to be RT’ed, or an online poll to be shamelessly manipulated, you grin, and go […]