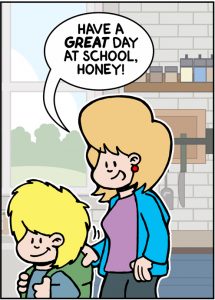 A very different comic was supposed to run yesterday.
I very much wanted to spend this week finishing off a delightful project for a French tabletop company – a terrific new boardgame, from one of my favorite designers. So I had a backup DORK TOWER – one that ran in Game Trade Magazine, back in 2020, all set up and ready to go.
But.
BUT…
Right now, I’m feeling gutted.  There’s a non-zero chance you are, as well.
Yesterday, I knew I needed to draw something. For my own sake.
I’m thankful that I can use DORK TOWER to work through my feelings, when the world turns mad. But I have to be honest – I am sick to death of the gun fetish in the United States, and I am tired of having to try and come up with something new to say, whenever something like this occurs, with its now oh-so-frequent regularity.
Most of all, of course, I weep – desperately weep – for the victims and their families.
Such strips are not fun to do. They are not easy to do. They tear at your creative soul, and leave you emotionally drained. I don’t want to publish something maudlin or trite, and yet it’s a difficult avoiding that, during tragedies like this, when everything sounds like a cliche, because they’re said, time and f***ing time again: “maybe this will change things,” “thoughts and prayers.” “this is not who we are,” “never again,” “hug your kids,” “tell the ones that  you love that you love them.”
The “Have a great day at school” strip was originally a far busier one, originally, which I pared down to its core concept. It seemed necessary, stripping away everything but the rawest emotion.
“Dark Tower,” a reader called it.
That’s OK.
I may have another strip on the topic for, Friday. A much angrier one. At first, I wasn’t sure how to convey  anger within what is ostensibly a humor strip.
I may have hammered that out.
Being angry AF helps.

Production-wise, after the recent “Anima Crossing” strips, where I was unhappy with how I drew Maree (the mother) and Claudette, I’m satisfied with the look of them, here. Maree’s hoodie is now light blue, a change from the grey she wore for most of the pandemic.  Claudette’s hair is also shorter, now, reflecting my 13-year-old’s style.
I believe I’ll keep Claudette at age 10 or 11 for a while, though. In my mind, that’s how old she should be. At least for a bit.
The teenage years will come soon enough.