Comics and Coffee Team Up to Help Dogs in Need 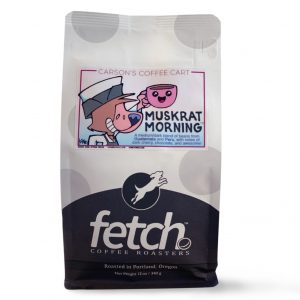 Muskrat Morning, named after Dork Tower’s Carson the Muskrat, is filled with flavor and personality: a blend of Specialty Grade coffees (the highest grade of coffee beans) carefully roasted to bring out balanced and nuanced flavor notes of dark cherry. Chocolate, and awesome.

Kovalic is donating all royalties from the sale of Muskrat Morning to charities Fetch supports.

“Coffee is a passion. Working with coffee and John at the same is a blast!” said Sarah Witter, owner of Fetch Coffee Roasters. “I’ve always loved John’s comics, and his drive to do good for others. Combining efforts for this project was an excellent fit for our mission at Fetch. Let’s face it, humor is needed, right now. Combine that with a great cup of coffee and your day has a fighting chance of being a good one.”

Fetch typically donates $1 from every bag of coffee sold to organizations that help dogs (and cats) in need. Muskrat Morning raises that bar to $4 per bag, through September.

“With Dork Tower nearing its 25th anniversary, it was time Carson got his own brew,” said Kovalic. “I worked incredibly closely with Fetch on developing this. By which I mean, they sent me many coffees to try, and I said ‘Wow! These are ABSOLUTELY DELICIOUS!’”

“It’s been a long-running joke in the strip that Carson the Muskrat actually looks like a dog,” he added. “So, no brainer. Let’s do good, help our best friends, and drink delicious coffee!”

Fetch Coffee Roasters is based in Portland Oregon. A woman-owned company, it was founded with the mission that all coffee with the Fetch name be ethically sourced, ethically sold, and always delicious. All coffee is specialty grade sourced through importers who prioritize the farmer, the environment, and quality of the bean. The charities Fetch currently works with currently are Soi Dog Foundation and the Oregon Humane Society.

John Kovalic is a multi-award winning cartoonist and Illustrator. His critically-acclaimed and fan-favorite comic strip, Dork Tower will celebrate its 25thanniversary in 2021. John is also the creator or co-creator of dozens of games, and the illustrator of many more. Such games include multi-million blockbusters like Apples to Apples and Munchkin.