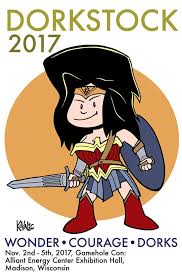 Gamehole Con/Dorkstock 2017 is done finished, and a wild weekend it was.

Without question, this was the largest, most successful Dorkstock we’ve ever pulled off, and all praise should go to this year’s director, Nancy Hutchins, whose put together an amazing slate of games and fun and Igor Bars.

The entire Gamehole Con crew was fantastic. Dorkstock absolutely could not be what it’s becoming without them. This is a terrific show that in five years has gone from a Good Idea to a Great Regional Con. The organization, attention to detail and professionalism behind the show is obvious. Bonus: it’s a hoot!

Surround yourself with good people, folks. They take the bullets for you.

It was an exhausting three (nearly four!) days, so I’m using today to recover a bit. But look, Saturday night, THIS happened: 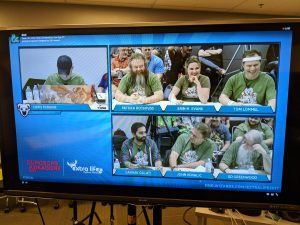 I do feel the desperate need to rave a little bit about the Extra Life game of Dungeons and Dragons I got to play.

I mean, lets be frank, to start with, things like this happen to other people. At least to my mind.

So suddenly finding myself seated alongside Pat Rothfuss, Ed Greenwood, Erin Evans, Tom Lommel and Guarav Galati, on a game DM’ed by Chris MOTHRAFRAKING Perkins, was definitely a “My God, How did I get here?” moment.

Guys? We were PLAYING DUNGEONS AND DRAGONS FOR CHARITY!

Not gonna lie: it sure beats biking sixty miles with a duck on your head. (And both were about six hours long, to be fair. SERIOUSLY: no contest).

I don’t expect anyone to wade through every hour of that video, but the fun quotient was off-the-charts. I was literally crying with laughter at times. YES, I know this makes for terrible television, but you can focus on Pat or Tom or Erin or Guarav or Ed or even Pat some more who are MUCH BETTER AT THIS KIND OF THING THAN I AM and also prettier. But everybody’s got to start somewhere.

Here are Five Things I Learned While Playing D&D for Charity: