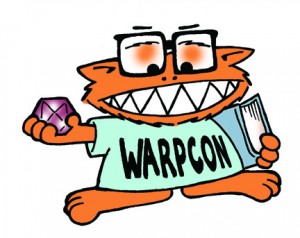 Just a quick note to let you guys know that I’m going back to Warpcon in a few weeks, and I’m as giddy as a Japanese anime schoolgirl before the tentacles arrive.

Warpcon is one of those conventions that’s become like family to be. I’ve been there 10 or 11 times, I think, over the last 15 years, and I hope to keep returning until they bar the doors of University College Cork to me.  I miss the friends I’ve made there, and I miss hanging around the delightful city of Cork.

Even better, my great friends and conspirators Chris and Dan from 9th Level Games will be there, so not only will Warpcon feature the usual Munchkin and Dork Tower madness, but you can bet your bottom beer and pretzel that Kobolds Ate My Baby will be taking center stage. ALL HAIL KING TORG!

(Side note: who’s up for an IGOR BAR CONTEST the Saturday of the show?)

I’m hoping to hit a couple more conventions in Europe in 2016, now that my sister has moved back to Britain, leaving the sunny shores (and lethal flora and fauna) of Australia, at least temporarily.

2015 was a big travel year, and I got to see Poland, Berlin and Brazil – places I’ve never been to, before. Another such trip has been offered to me in May, 2016. I’ve not accepted yet, but I need to make a decision soon, and I’m strongly considering it.

I’ve been working in the gaming industry for about 20 years, now, and I still can’t believe people want to drag me all over the world. More remarkable still is witnessing first-hand the worldwide popularity of tabletop gaming. The huge signing lines I had at Pyrkon, in Poland, and Comic Con in Brazil, were freaking exhausting!

If you’re a convention, and are interested in having some guy who draws muskrats come to your show, here’s the deets: http://www.dorktower.com/about-john-kovalic/appearances/.

If you’re not a convention, but want me to come to a show you love, bug the organizers (politely, of course). There are a few spots left for 2016, and – of course – it’s never too late to start thinking about 2017