Who’s at fault when a movie gets spoiled?  My take: 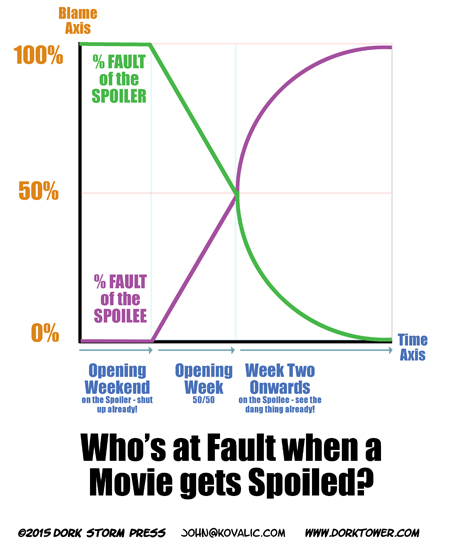 This is absolutely a “Your Mileage May Vary – and Probably Should” sort of graph. But after catching “the Force Awakens” last night, I’ve been thinking about this almost as much as that (REDACTED) scene on (REDACTED) where (REDACTED) goes and (REDACTS) the mother-flipping (REDACTED).

On the one hand, the Internets seem to be conscientiously and surprisingly spoiler-free this morning. At least the circles I toodle around in.

On the other, I believe “I won’t get to see the movie for two weeks – DON’T SPOIL IT FOR ME!” demands are patently unfair, particularly in public forums.

“Give us at least another week to watch it, for crying out loud.” posted a reader, on my Facebook page.

Sure, as that’s when the culpability have yet to converge. But you also need to actively avoid spoilers. In this day and age, asking everyone to keep their traps shut about the most gigantamous pop-cultural phenomenon of the year for a full week seems…impractical at best. Spoilers will leak from all sorts of unexpected sources – there’s just no way around that.

I was fortunate – I saw “the Force Awakens” Spoiler-Free. It’s the first flick in a long time where I cared about avoiding spoilers. But I was also careful to avoid much of the internet and all movie sites for the last week.

I’m glad I did, and I do feel for anyone who’s had this or any movie spoiled.

But there needs to be some sort of Ms. Manners-like accepted grace period where we’re finally allowed to talk openly about a giant freaking pop-cultural phenomenon.

The Monday following opening weekend is what I propose. Sure, it may be tough to keep our (my) big yaps shut WHEN ALL WE (I) WANNA DO IS TALK ABOUT THE (REDACTED) WHEN IT (REDACTS) THE (REDACTED)!!!

But I’m OK maintaining radio silence for the sake of others.

The remainder of opening week onwards, though, those of us who choose to wait – or who are forced to, by circumstances beyond our control – do so at our own peril.

PPS: I think I came up with this chart mostly to label something “Blame Axis.”