The other day, NPR’s “Fresh Air” featured an interview with Berkely Breathed, famed cartoonist and creator of Bloom County, one of the great comic strips of all time.

The full interview can be found at at http://www.npr.org/templates/transcript/transcript.php

Towards the end of the chat, Breathed touched on winning the Pulitzer Prize, and talked about coming to an Association of American Editorial Cartoonists convention.

BREATHED: (Laughter) It was putting a point on the attitude that the rest of them had, and when I spoke at the editorial cartoonists convention, they – every one of them boycotted it so all I had in the audience were mostly college cartoonists.

BREATHED: Those were fun days. (Laughter)

Look…gotta say…I was there for that talk, in 1988. And…and…and that’s just not what happened. At all.

It was the first AAEC convention I ever attended. Mostly because it was close. In Milwaukee. My good friend Mark Giamo and I made the hour-and-a-half drive from Madison. I can’t speak for Mark, but me? I was in awe.

Many of my cartooning idols were in attendance: giants like Ben Sargent and Dick Locher, and folks I didn’t yet know, but who would soon become hugely influential on my work, like Steve Sack and Clay Bennett.

And, of course, Berkely Breathed was to speak at it. 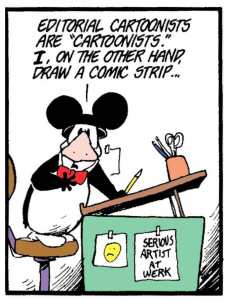 Bloom Country was huge to me, in the 1980s. I loved it, I adored it, I worshiped it (almost)…as did most right-thinking people. Breathed was pretty darned close to an idol of mine, and if you read my college strips, the Bloom County influence was almost painfully transparent at times.

I knew there was some controversy surrounding his Pulitzer from the prior year, and some editorial cartoonists’ feelings had been, well, let’s say “hurt.” But his talk seemed to go just fine. Me? I remember it being generally good-natured, almost apologetically explaining his Pulitzer work, with lots of chats and handshakes afterwards.

(Also: I remember Breathed was wearing a hideous suit. It may have been pink.)

Was there a boycott? Not that I ever saw or heard about. Heck, the AAEC invited him to speak, and paid his way. What would be the point of a boycott?

Did some cartoonists get up and leave? Possibly. Or they could have just been going to the bar. But there was no mass walk-out.

Again: this was my first AAEC convention. I was amongst the folks I admired more than anything. I’d have noticed if the giants of the biz had fled, or were no-shows.

There’s plenty you can complain about, with editorial cartoonists. Surly lot? Yes. That’s partly why I loved hanging out with them. Hacks? More than a few, sure. But many, many greats. Giants. Did they mass-walk-out on Breathed? Or boycott his talk? Not that I ever saw.

Editor & Publisher’s David Astor covered that AAEC meet. No mention of a kerfuffle in his memoirs. It’s the sort of thing you’d think he’d notice. 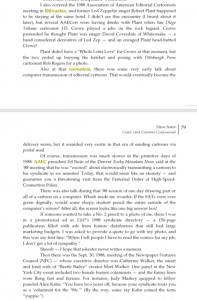 Indeed, over on Facebook, Cartoonist Terry LeBan, who was also there, notes ” I know you wanna be a bad boy, Berke, and maybe the National Association did bitch about that prize, but what I saw was a bunch of guys who were pathetically grateful to bask in your presence for a half an hour.”

To which Ed Stein, then of the Rocky Mountain News, adds, “ I’m the one who invited Berke to speak to the AAEC, and I can attest that the members were enthralled; nobody walked out. When I issued the invitation he told me that he was afraid we’d hate him, and I assured him he’d be welcomed, as indeed he was.”

Not sure why Breathed would exaggerate something to such an extent, or why he’d even feel the need to. Of course, this could be truly how he remembers it, which is possibly even odder.

As I said: I was a huge Breathed fan in the day. Still admire his stuff enormously. So…no horse in this race. And that quote may seem a silly little thing to get worked up about. But…

Anyway, it’s just my word against that of a Pulitzer-winner who changed cartooning.

PS: But that suit! ‪#‎amirite‬?