First off: EVERYONE GOT THEIR CHARITY COLORING BOOKS BY NOW, right?

Anyway, here’s a new drawing of Matt and Gilly I just finished. Gilly is back in her black Perky Goth garb for the first time in years. So I suppose this counts as a #ThrowbackThursday on some level. 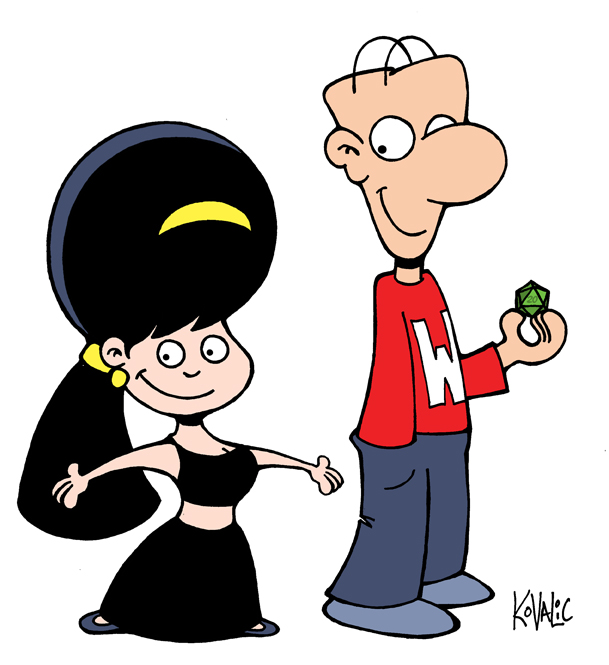 Why am I thinking about (and drawing) Matt and Gilly? REASONS.

But in the meantime, one thing I enjoy about these two is that each has – in my mind, anyway – their own theme song. And has had those songs for several years, now. Songs that felt obviously theirs as soon as I started drawing them. That’s how close I feel to the characters.

Gilly’s Theme – “Get What You Give” by the New Radicals. It’s a song I find full of life, energy and affirmation. Gilly remains these things, though I love that the Fake Geek Girl strips have helped me discover an inner strength and sharpness that I never realized was there, before. I think being on her own for a while has been good for her character – literally.

Matt’s Theme – “Boy About Town” by the Jam. This is a bit trickier. Since first assigning it to him, in the late 90s, he’s grown into an angrier, less affirming sort. Particularly these last few years. He’s become more easily frustrated, more introspective and altogether a tad dour.

On the plus side, the Jam’s live take on the song does feel angrier than the studio version.

Anyway, maybe Matt just needs to listen to it again, to pull him out of his funk.

Or maybe he needs someone returning to his life…

But what’s in it for Gilly?