It was my nephew’s 13th birthday, Monday. So the Lovely and Talented Judith,  Daughter, Age 5, and I spent the weekend with family, in the great city of St. Louis.

My nephew’s a great kid, and is currently in a Star Wars phase. But I repeat myself. He also got Daughter, Age 5, interested in Star Wars (prying her away from the Frozen Blu-Ray that she’s now watched ooooooh let’s just call it sixteen times in the last two days, not that anyone’s counting).

So, when my nephew  was asked what kind of birthday cake he wanted, his answer, naturally, was “Boba Fett.”

To which someone then replied “hey – Uncle John can make that. HE’S an artist!”

“He’s an artist,”  I truly believe, is a phrase that every cartoonist dreads. These few words can cover a variety of tasks people assume you’re well-suited for, including (but not limited to) portraiture,  caricature, graphic design, layout, mural painting, sculpture and, yes, cake-decorationg.

I have decorated a couple of cakes for my daughter, in the day. Mostly, I fall back on whatever skills I’ve acquired from modeling battle terrain for my Warhammer miniature wargames. For example, Daughter’s 4th birthday cake, which she wished Jake and the Neverland Pirates-themed: 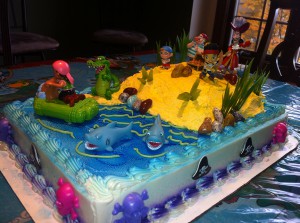 And her 5th birthday cake, which she wanted to be a “Princess and Ponies” mashup: 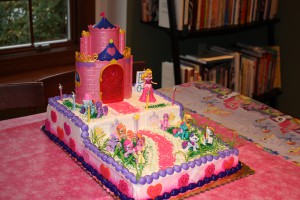 If it was up to me, I could have created a TERRIFIC Battle of Hoth cake for my nephew. Instead, I had to work with frosting (not a medium I’m comfortable in) atop other frosting (the world’s worst canvas). Freehand. While the entire family was watching.

It wasn’t great, but, look, I’m not gonna lie here – it didn’t turn out too badly, and I felt pretty darned OK about myself and my ongoing quest to become Favorite Uncle. 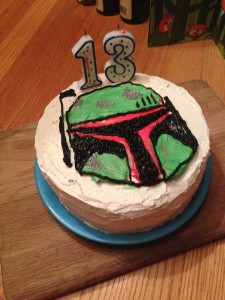 Obviously, this being 2014, I immediately posted the picture to Twitter.

Where someone then brought it to the attention of the Bobba Fett fan club account.

Daniel Logan, the actor who played the young Bobba Fett, saw it, and tweeted “Looks great to me!” 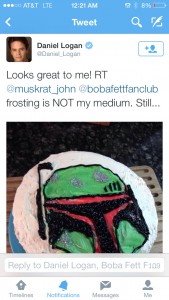 This is me, letting that sink in for a second.

So the night before my nephew’s birthday, I was getting ready for bed, feeling pretty chuffed with myself. In the morning, I thought, I could let my nephew know that Boba Fett himself approved of his cake. Grateful for this bit of geeky goodness, I tweeted Daniel, to let him know he’d be making a young boy’s day. To which he replied: 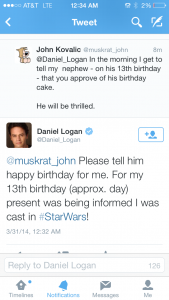 “Please tell him happy birthday for me. My 13th birthday (approx. day) present was being informed I was cast in #StarWars.”

Thus it came to pass that the next morning, before school, my nephew found out that not only did Boba Fett approve of his cake – HIS! – but that Boba Fett also wished him, specifically, a happy birthday.

There really aren’t words to describe the look on his face.

Anyway, this is just my very, very wordy way, then, of saying thank you, Daniel Logan. You made a great kid incredibly happy on his birthday, and I truly appreciate it.

Indeed, because of you, he was over the moon.