My Year In Review Part II: Getting Back on Track 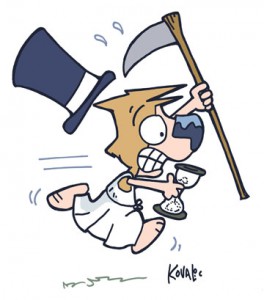 There were two things I was particularly proud of in 2013.

The first was making sure that family always came before work.

I’m extraordinarily fortunate to be in a position where I can prioritize family life, and I take advantage of that every opportunity I get. My wife and my daughter are my world. After almost 20 years of marriage, and five of fatherhood, I’m living the kind of dream-life that makes David Byrne pen lyrics like “My God, how did I get here?”

I want to mention the family thing right up front, because anytime I talk about cartooning as a business, I get a slew of sincere readers and followers sending deeply concerned messages. Messages that tell me to stop and smell the rose-colored D20s, spend more time with family, and hug my little girl. Which is all wonderful and well-meaning and appreciated and all, but if I hugged my daughter any more, I’d probably be legally required to pay rent.

Anyway, the other thing I was proud of last year? Munchkin.

As I noted before, working with Steve Jackson, Andrew Hackard, Phil Reed, and the whole Steve Jackson Games Munchkin team is as fun as ever. It’s a privilege, and a blast an a hoot. And I’m not one to throw around the word “hoot” lightly!

But it’s one thing to have fun – it’s another entirely to make a living from “fun,” ensuing you have fun, year in and year out.

Watching Munchkin grow into a gaming phenomenon over the last few years has been thrilling, yes. But it’s also been an education. Munchkin accounts for a significant portion of Steve Jackson Games’ sales every year, and it’s gotten there by being a terrific game, yes, but also by being managed very, very ably.

Phil Reed is the Chief Operating Officer at Steve Jackson Games. But I prefer calling him Munchkin’s Shepherd. He puts in an enormous amount of hard work behind the scenes, making the business of Munchkin roll along at a seemingly effortless pace. Of course, it’s the exact opposite of “effortless,” but you’d never know that, looking from the outside, in.

Anyway, the fact that I tackle Munchkin as professionally as I can should be directly attributed to lessons learned from Phil, these last ten or so years. Absolutely, it’s a great, fun gig. But if you want the fun to last, be a pro and meet the deadlines!

Remember that old Douglas Adams quote, “I love deadlines. I like the whooshing sound they make as they fly by?” You’re not Douglas Adams. Neither am I. Missing a deadline is bad. Very bad. So when a new Munchkin assignment comes in, that gets top billing on my project list. I start at 9 am, I finish at 5 pm. I have a blast – good lord, how could I not? I draw Munchkin, for Heaven’s sake! – but the work gets done, and it gets done on schedule, and to the best of my ability.

These last few months, as I took on far too many Kickstarter Stretch-Goals and minor outside projects than was healthy for me, I missed a few deadlines. And it felt awful. Especially since some of these were for pals. I didn’t want to give anything less than my best effort on any of them, and many sleepless nights ensued.

And then maybe you do another, and maybe another, and another. They won’t be due for months, anyway. Heck, it’ll be four whole weeks before this Kickstarter is even over, and OH MY GOD, suddenly they all come due! Four in a week, at times (I’m looking at YOU, month of September, you conniving bitch). The Creativity Credit Card bill just arrived, and you realize how deep in Promised-Cool-Stuff debt you are.

I can’t emphasize this enough: I don’t regret a single Kickstarter commitment I made. Many of them pushed me in ways that will benefit my own work for years to come.

But what if I treated my own work the same way? What if I gave my own stuff – the books, the comics, the writing – the time and seriousness that I gave all the other side projects, these last few months? What if I used that ol’ Creativity Credit Card, and instead of maxing it out, only pulled it out for that occasional treat, once I knew I had enough in the Cartooning Savings and Loan account to back it up?

(By the way, yes, I fully realize that by using the phrase “Cartooning Savings and Loan account” I have stretched the analogy to the breaking point SHUT UP.)

Now, I’m not saying I’m never going to do another stretch goal for a pal ever again. I just have to be far more realistic about it. I recently turned down contributing to two Incredibly Cool Kickstarters. I don’t wanna say which ones, because it could break your heart as badly as it broke mine. Tears could be involved.

From here on out, my work days  have to have three priorities:

Other stuff? I’ll do it once the main work of the day is done. When I have free time. When it doesn’t distract from family time. But mostly, when it won’t make Business Manager Monica want to whack me with a +10 Two-By-Four of Doom.

Let’s see how this year goes.

Creativity-on-credit-wise, at least. But also with an eye to Monica’s two-by-four…