Thirty years ago, more or less, I drew my first true gaming comic.

It was based on the little black books of the Traveller roleplaying game – my perenial favorite. I drew it for a ‘zine based in London, Alien Star.

Alien Star was created by a chap who ran the Minifigs store near…um…Victoria, I seem to remember. No, no, no – not LEGO minifigs, you silly young people. The old lead historical wargames minis maker. It wasn’t the greatest ‘zine the world had ever seen, but it was solid. Remember: those were the days when Judges Guild supplements were awaited with bated breath. If gaming could overlook those production standards, pretty much anything was acceptable. 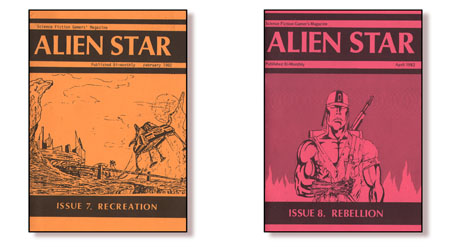 Anyway, I was unpacking some boxes – we’ve been in the new house for two and a half years, now, and still there are BOXES – when I came across the two issues of Alien Star that “Dirk Starworthy of the “I.M.N” appeared in.

No, I don’t remember what “I.M.N.” stands for, anymore. My guess is Imperial Merchant Navy, or somesuch. It didn’t really matter, anyway, as the strip only appeared twice.

It wasn’t a very promising strip – a slight, poorly-drawn thing – and there’s no indication I was doing anything other than making it up as I went along. There’s no plot. I’m not sure there ever would have been a plot. Pern? Why the hell did I have them end up on Pern? But there you go.

If the writing is illegible – look, lettering’s never been my strongpoint – just click on the strip for a larger image.

It would be nice, had this first sample shown some spark of real promise…some indication that its crator could earn a living doing this sort of stuff.

But it didn’t. It was something a kid scribbled down.

However, was a start.

And it’s hard to get worse, once you start.

“To be continued!” indeed.