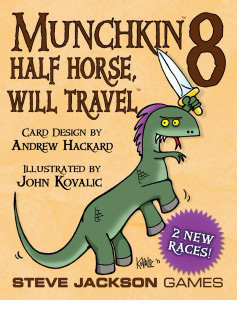 So it’s a relatively well-known fact that I’ve illustrated more than 3,500 Munchkin cards over the last ten years – this breaks down to about a card a day. The latest expansion for the game system is (Drum-roll please: ta-DAH) Munchkin 8 – Half Horse, Will Travel, a brand-new 112-card set, and honestly, I think it’s my favorite so far.

Munchkin is always a hoot to work on, and this latest set was no exception. Part of the joy was getting to design two entirely new races for the Munchkin mythos: Centaurs and Lizard Guys. Not only is this the first new expansion for the “classic” Munchkin fantasy setting in about two years, but these are the first new races I’ve designed since the Gnomes, way, WAY back in Munchkin 3 – Clerical Errors.

Munchkin 8 – Half Horse, Will Travel also provides players with Race and Class Enhancers, too. Now you can be Elite, Legendary, or Elder! As is only right.

I wanted to make the new races something really special, so I took a couple of weeks off,  last year, just to sketch like there was no tomorrow, to get them just right. It was a terrifically fun process – frankly, designing Munchkin characters just doesn’t seem like work at all. I hope to post some of those early sketches soon, but here’s an exclusive look at one of the finished cards. It’s a treasure called the Croc Pot, and features a rather perplexed-looking Lizard Guy.  Here’s what game designer Andrew Hackard, otherwise known as the Munchkin Czar, had to say about it:

The Croc Pot is one of the very last Treasures written for this set; I needed another Lizard Guy-only Item, and I was short on Headgear, so this suggested itself to me while I was contemplating what to do about dinner one day.

If Croc Pot was one of the last cards Andrew designed, it was one of the first I actually drew. I tend to attack all the cards in a new Munchkin set in alphabetical order. I’m kinda OCD that way. Fortunately, all of the early character design work paid off, and I think it looks pretty darned spiffy! There was no learning curve on this set. 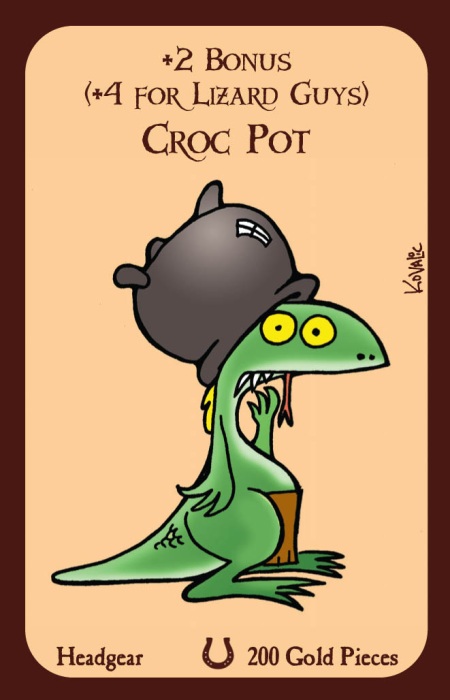 If you wanna grab the latest expansion (and darn it, you should), head on over to your hobby games store. Munchkin 8 began shipping on February 27th.