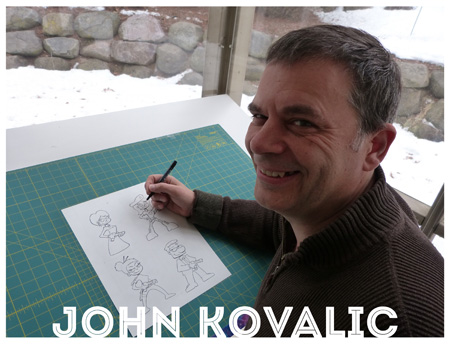 John is a bestselling, award-winning, cartoonist, game designer and writer. Millions of copies of his games and books have been sold worldwide, to all ages, giving his magical, frenetic artwork and unique wit a truly global fanbase. His work has appeared everywhere from the NEW YORK TIMES and the WASHINGTON POST to ROLLING STONE and DRAGON MAGAZINE. His world of geeky goodies includes critically acclaimed comic books such as DORK TOWER and DR. BLINK: SUPERHERO SHRINK. (DORK TOWER was one of the very first webcomics, debuting online in 1996.)

John is a co-founder and co-owner of Out of the Box Games, and had a hand in the creation of the revolutionary party game, APPLES TO APPLES (15 million copies + sold). Working with Steve Jackson Games, John’s also responsible for the look of the fan-favorite perennial best-seller MUNCHKIN card game (5 million + sold). He’s drawn more than 7,000 cards for MUNCHKIN, and its spin-offs, and wouldn’t mind a vacation, now, because of it.

John was inducted into the Games Manufacturers Hall of Fame in 2004, the first cartoonist thus honored.

John lives in Waunakee, Wisconsin, with his wife and their child.

Click on thumbnails for larger images. All art published unless otherwise indicated.