OK, I’ve been terrible at updating this work blog as often as I’d hoped, but I’ve been aces about actually getting work done every day, to finish up THE TAO OF IGOR.

I’m back in the US, after ten days in London, mostly for my sister’s 50thy birthday. I accomplished a great deal on TAO while there. More pages are headed off to the proofreaders today, and I am hoping that sometime next week, the PDFs will be able to go out to all backers.

I’m trepidatious about stating something as definitively as “sometime next week.” I’ve been wrong so often in the past. Honestly, though, all that is left is the Afterword, some touching up of the last five pages of the story, correcting the typos the proofreaders found, and finishing the coloring of the Sistine Pages. Going by what was accomplished these last couple of weeks, I believe this is do-able.

Worst comes to worse, I will send the PDFs off if the Sistine Pages aren’t fully finished, completing those before the book goes to press. 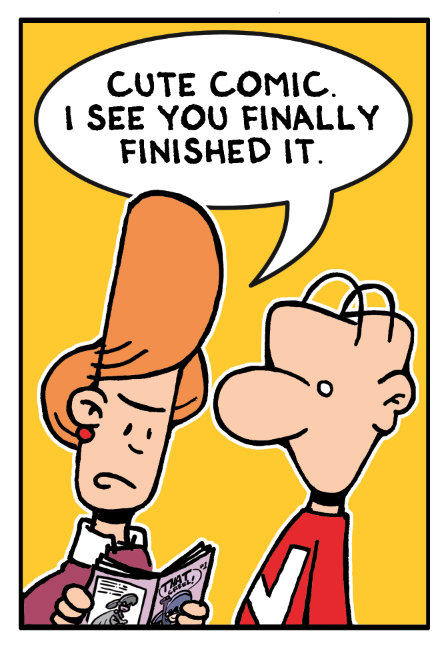 I’m hoping the next update will be the “the PDFs are done, and the book is off to press!” update. Fingers crossed!

In the meantime, the DORK TOWER web strip has obviously been suffering as I’ve turned so much of my attention to finishing off TAO.

That ends this week, as well.