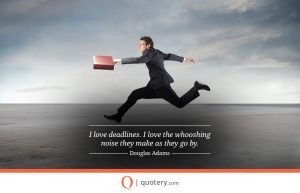 We had some flooding in South central Wisconsin, last week, and Casa Muskrat was hit.

We’re safe, we didn’t lose much of anything, and all is dry now. Still, lugging the contents of an entire basement to another floor is Nature’s way of telling you, “you’ve got too much shit.”

(Also “hey – I bet you didn’t know you had muscles that could hurt, here!“)

One thing that did get hit, though, was the deadline for the latest Munchkin project.

As it stands, the project will wrap up two days late – not bad, given a week of human pack-muling boxes that were far heavier than they had any right to be.

Still, coming in late with a project is Not Good.

Let’s not mince words: I hate blowing deadlines. I hate it like poison.

I tend not to use the word “hate” much, but something else that makes me gnash my teeth is when younger artists casually throw around that Douglas Adams line, “I love deadlines. I like the whooshing sound they make as they fly by.”

Mainly because none of us are Douglas Adams.

If you’re trying to break in as a writer, or an artist, here’s the thing: deadlines matter. A lot.

But sometimes, life gets in the way. Waters rise, basements flood. Possibly you simply misjudged how quickly you could pump work out.

And that deadline is staring you straight in the face. Snarling.

The moment you suspect you won’t make deadline, get in touch with your editor/art-director/publisher/assorted-team-member immediately. No really. The moment!

Even if you’re a week away, let them know the second you suspect things Aren’t Going Quite Right.

It never feels great, but you know what’s worse? Leaving your team in the dark. Having them believing all’s fine and dandy dandy – and then springing the news on them the day of the deadline. Or worse, two, three or four days later, when someone calls to ask “what up, dog?”

In fact, even if thing are going dandy, let your editor/art-director/publisher/assorted-team-member know that, too. I like updating folks on a weekly basis, at the very least. Even if the news is “no news this week.”

And even if things are going great – YAY! Good for you! – but you’re not talking with your editor, she’s probably thinking something’s wrong. Very, very wrong.

DO NOT GIVE ART DIRECTORS ULCERS! They are on your side!

Pick up the phone. Talk with the editor you’re working with. Let her know what’s up.

Don’t let your team down: let them know.

Make explanations, not excuses. Most editors and art directors have been there. Ain’t nobody who’s ever picked up a pen or a stylus  that’s never blown a deadline, whether or not it’s through no fault of their own.

Even if you haven’t done so yet (and I find that hard to believe about anyone, TBH), you’ll blow deadlines.

Don’t get me wrong: I love deadlines. I like the squishing sound they make, as you tramp them down, triumphantly.

But on those rare occasions when that might not happen?

First thing I do, I pick up the phone.

PS: We’re back to posting TWO new Dork Tower comic strips a week, thanks to our wonderful Patreon patrons! Join the fun and see the comics early, plus a lot, lot more, for as little as $1 a month ($.12 a comic!)

PPS. HEY! Thanks for sitting through that. As a reward, here’s a photo of Douglas Adams from 1980, at London’s Forbidden Planet, and the copy of the Hitchhikers’ Guide to the Galaxy he signed for me, then. 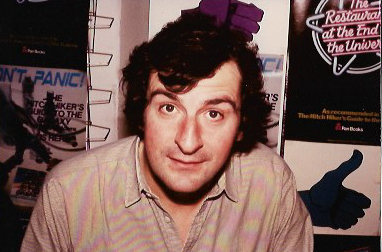 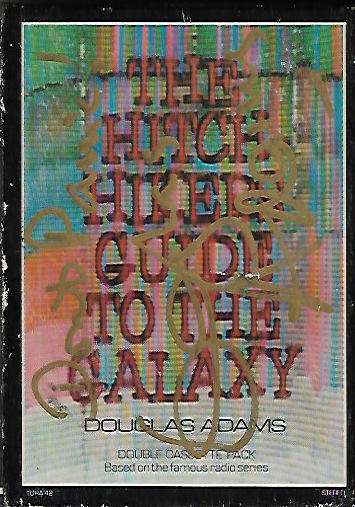