Did you know that this Saturday, someone will win $10,000 for playing Munchkin? Munchkin? I sure didn’t, until a few months ago.

The Unrivaled Tournaments have become serious business, and conclude this weekend, their Grand Finals in Las Vegas. Meaning some lucky gamers shall win $10,000 each for playing the likes of Munchkin, King of Tokyo, Ascension and Epic Spell Wars.

I wouldn’t have believed it unless I saw it with my own eyes.

Which I will, Friday and Saturday, since I’ll be there, along with my good pal (and Munchkin Tzar) Andrew Hackard. (Also some dudes named Wheaton and Callen. And more. Go figure.)

Obviously, this is a thrill, a privilege, and a gob-smacking opportunity to see someone win ridiculous amounts of moolah for stabbing their friends in the back. “Go up a level,” indeed. 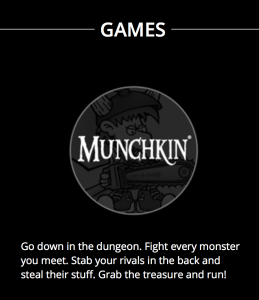 So if you happen to be in the neighborhood, and maybe happen to be taking part in the tournament, BEST OF LUCK! I’d give you some advice, but in 16 years I’ve only every won two games of Munchkin, so possibly you’re better off without it.

(People tend to gang up on me early and often, believing I know something of the game’s nuances because I drew the cards and, OSMOSIS, I guess. Anyway, yes, I’ve won two games. They were, of course glorious. One was against the Polish National Champion,because everyone ganged up on him. And I believe that now makes me the Polish National Champion. Possibly even President.)

I may not win many games, but I will, however, have my signing pens with me in Vegas, and my schedule will be:

I hope to see you there, and I hope you have better luck playing Munchkin than I ever have.

Outside of Poland, of course.