Late in the summer, it’s a constant race to prep fresh garden veggies for sauces and soups, for canning or freezing.

Peeling tomatoes to be preserved isn’t particularly difficult, but it usually involves blanching and ice baths, or fire-roasting – both of which can be  time-consuming and messy. Particularly when you’re dealing with 10 or 20 lbs of tomatoes at a time.

Some people just leave the skins on, but I’m not a fan of that – even mega-blended using something as powerful as a modern Veg-O-Matic, the tiny skin particles that remain bug me, in a sauce. Like an itch that can’t be scratched.

Fortunately, I stumbled across a process that has made my late-summer sauce- and soup-making much, much easier.

A couple of years ago, before a trip, I had ten pounds of tomatoes, and no time to prep them. So I threw them in a plastic bag, and plonked that straight into the freezer.

When I pulled them out and let them thaw a week later, I noticed two things:

Then all you need do is pick them up…and peel using your fingers! 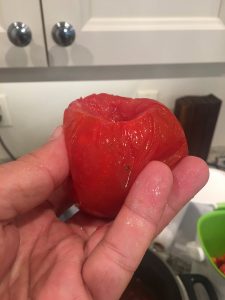 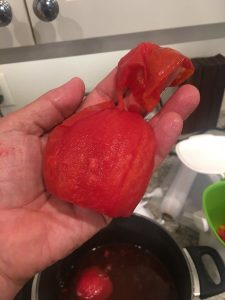 The now-peeled tomatoes head straight for the food processor. (Some folks will want to remove the seeds: I used to do that all the time, but I’ve honestly found that they taste about the same, either way, and didn’t warrant the extra step.) 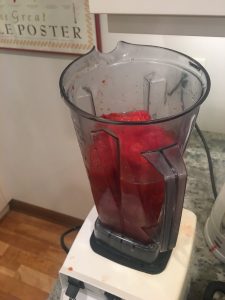 A relatively thick purée results. (Add the tomato liquor back in, if you’re going for a soup instead of a sauce).

Then into the sauce pan. My basic sauce recipe:

As a lot of the liquid you’d be cooking off is already gone, you don’t need to simmer it as long. An hour’s plenty, and the tomato flavor’s fresher than sauces that require longer reducing… 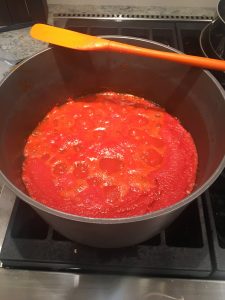 Both tomato sauce and soup freeze well, and I have gallons of each in the deep-freeze by the end of the season, ready to war, the winter months. This prep method saves me a ton of time, as I rush to use the harvest veggies before they go bad.

The clean-up is far easier, as well.

Now on to Gazpacho…