SKY CLUB CUISINE
– or –
When Life Hands you a Club, Make a Sandwich

Flying home from Poland last weekend, I experienced a two-hour delay in Detroit.

Well, technically, Delta had a two-hour delay. But I was along for the ride.

No biggie, since, a couple of years ago, I went all-in on the airline, and purchased a membership to their “Sky Club” lounges (along with promising them my absolute loyalty, as well as any potential second-born. That’s how airlines work, these days).

Now I freely admit this is very “One-Percenter” territory. However:

Most importantly, as Sara Benincasa notes in her essay ‘Join the Fancy Club at the Airport,’ “I deserve a break, just like any of those fancy people. And so, dear reader, do you.” So who are we to argue with Sara? So with two free hours, I started thinking about ways to get into trouble at things to do at the Delta Sky Lounge.

US airline lounges are pretty spartan things, compared to their European counterparts. But the Yanks started upping their game – slightly – over the last few years. USA! USA! USA!

Though still far from on par with the rest of the civilized world, long-gone is Delta’s Sky Clubs‘ hard-boiled-eggs-and-chicken-salad-only nadir. Soups, meatballs, hot and virtually edible chicken, and mac and cheese have started popping up, more often than not. O BRAVE NEW WORLD!*

With a literal buffet of possibilities at my disposal, I experimented. STEP ONE: Take one Nissen-brand Cup Noodles ‘cup’ that some Delta Sky Clubs have been offering since (I’m spitballing, here) the upturn in Asian business. 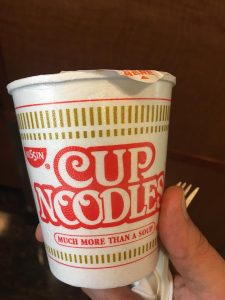 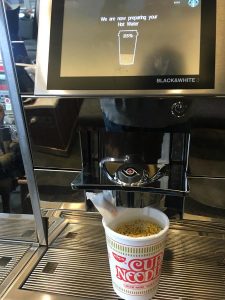 STEP THREE: Re-cover the cup, and wait for three minutes. (OK, nor is step 3, printed right on the cup). 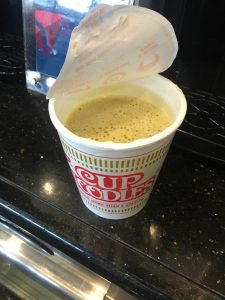 STEP FOUR: Dump the Cup Noodles of the wretched salt-laden death-slurry it calls “soup,” saving the softened noodles. This is actually more satisfying than it should be. This junk is so salty, I found myself craving water, just watching it. 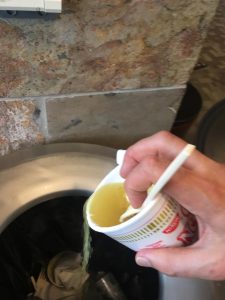 STEP FIVE: Go to the salad area. Yes, Delta now has a “salad area.” Shut up. Anyway, top the noodles with some warm of those chicken chunks that just seem to be sitting there, in need of…something – a kind word, perhaps? (Actual Chicken location and availability may vary according to Sky Club). 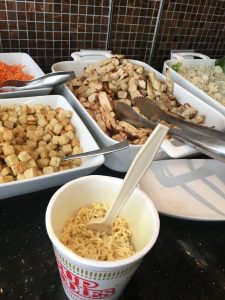 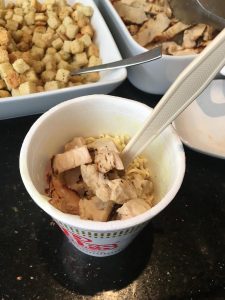 STEP SIX: Wander over to the soups. Delta usually has two available. Fill cup of noodles and chicken with either Wicked Thai or Butternut Squash Curry soups, if on-hand (others may work in a pinch – I’m looking at you, Italian Wedding Soup). 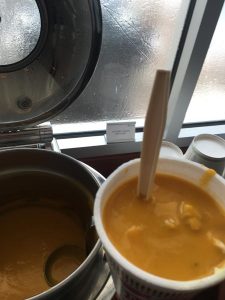 STEP SEVEN: Finish with a generous squeeze of Sriracha (Delta, bless them, always has it on hand) three wedges of lime from the bar area. Top with crispy noodles, for crunch. 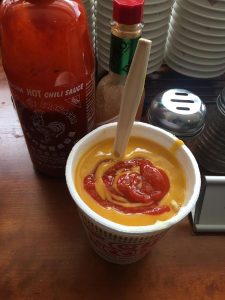 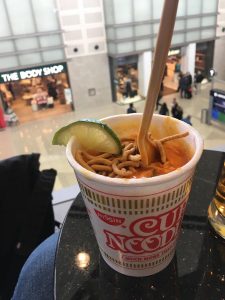 STEP EIGHT: And voila! Enjoy a tasty raman-esque snack, and smile quietly to yourself, as other patrons look in horror! Bon appetite! 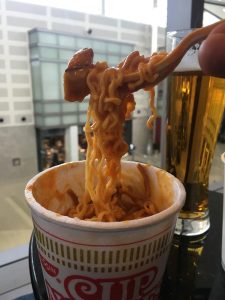