At least my part.

It was, without question, the largest single Munchkin project I’ve ever tackled at one sitting.

Well, several sittings, really. Over about a two-month period.

The final sitting was the best, though. In London at the time, I wandered around Southwark – Shake-dawg’s stomping grounds – and chose the bar at Shakespeare’s Globe to finish the last few drawings. 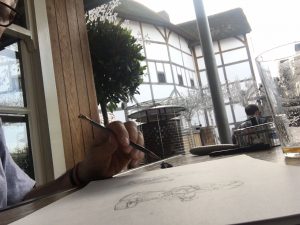 It was a delightful day to be sitting along the Thames. I even broke my “No Drinking During Schoolnights” rule to have a couple of celebratory Globe Ales. They were delicious. 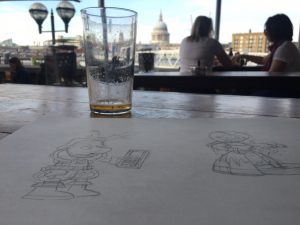 I might have been looking to channel the ghost of the Bard himself. I probably ended up channeling the sprint of Sam Wanameker, founder of this incarnation of the Globe. Regardless, it was a good place to finish up this massive project.

Anyway, 250 pieces of art later, this is what “Relief” looks like (or possibly it’s the two pints of Globe Ale): 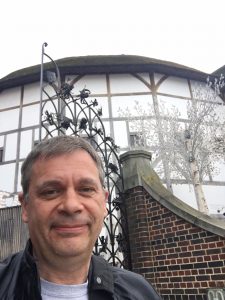 Munchkin Shakespeare was a hugely fun project – but it was also hugely huge, thanks to you monsters and all the stretch-goals you hit.

Would more time have been helpful? Yes. But then, that’s always the case. Point being, Munchkin Shakespeare is going to look fantastic. Most of that is due to the Steve Jackson Games Art Department, which always manages to make my silly little scribblings look great. Those folks are amazing.

Also? The cards are hilarious. I mean, truly madcap, green-eyed, bloodstained tremendous. Thanks to Steve Jackson, Andrew Hackard, and many contributors who threw in crazy ideas during a crowdsourcing braintrust info-dump that launched this too, too silly project.

Here are some first-looks at a few of the cards (Insert usual “Art Not Final” etc. things I’m supposed to say here)!

Finally, here’s one of my very favorite cards (which was also one of the very first I drew for Munchkin Shakespeare):

(By the way, here’s a link to the Munchkin Shakespeare Pre-order Backerkit, which is open until April 17).

As always, working with the Steve Jackson Games crew was a joy, and I may well have the best job in the world.

Now exit, pursued by a Bard. 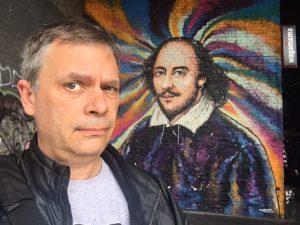 PS: Munchkin Shakespeare kind of took over my life for a few months, there. Some things got pushed to the back-burner: Dork Tower and Insane Charity Bike Ride updates, for a start. More on those later this week.