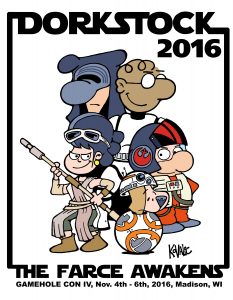 Gaming registration opened at Gamehole Con, last week, and the Dorkstock track of events has been finalized. I honestly can’t believe it all looks so awesome, and huge thanks have to go to Dorkstock coordinator Frances Moritz, Dork Storm Press Business Manager Alex Aulisi, a whole SLEW of Steve Jackson games MiBs (John “Shadowcat” Ickes taking the lead), and, of course, everyone over at Gamehole Con – my pal Alex Kammer in particular!

So without any further ado, here’s what will be on tap for Dorkstock 2016!

Hope to see you there!

FRIDAY 2 pm (DORKSTOCK TABLE A) MUNCHKIN FU Guest Artist Edition (Steve Jackson Games MIBs) – How do YOU Fu? Karate-kick off Dorkstock with the latest MUNCHKIN game illustrated by John Kovalic,  and level up! Win a signed copy of the latest Munchkin madness, and other swag!

FRIDAY 10 pm (DORKSTOCK TABLE A)  CASH ‘n GUNS (DORKSTOCK) – The heist went well! The loot is in the basement! But so is the rest of your gang, who all want a share of it. It’s the last scene of “Reservoir Dogs” in hilarious, frenetic, and easy-to-digest party game form!

SATURDAY 10 am (DORKSTOCK TABLE A) OFFICIAL MUNCHKIN TOURNEY (Steve Jackson Games MIBs) –Kill the Monsters! Steal the Treasure! Stab your buddy! WIN THE TOURNEY! This is an official Steve Jackson Games Munchkin tournament! Do you have what it takes to level up?

SATURDAY NOON (DORKSTOCK TABLE A) DOUBLE FEATURE DIRECTOR’S CUT (Alex Aulisi)  – A movie game that’s actually a *game*?  Unheard of! Double Feature doesn’t have a thing to do with trivia, which made it a hit! Play this hilarious, easy-to-learn game with some of its original creators!

SATURDAY 2 pm (DORKSTOCK TABLE A) THE IGOR BAR BAKE-OFF! (DORKSTOCK) – It’s a Dorkstock tradition! The sweet, sweet taste-off, as people pit their Igor Bars for sugary dominance! Enter your own (recipe at http://tinyurl.com/igorbars), or stop by and try some! Be prepared for the sugar rush!

SATURDAY 2 pm (DORKSTOCK TABLE B) GARDEN GNOMES & PROTOTYPES! (DORKSTOCK) – So, Munchkin lovers … you like games about diminutive creatures that backstab friends and make your blood pressure skyrocket? The Madison-based co-designers of DOUBLE FEATURE will be demonstrating their trick-taking card game, THOSE PESKY GARDEN GNOMES, as well as unpublished prototypes such as PENGUIN PUSH and SMITE CLUB. If you like cutthroat games about the small and cantankerous, have we got a side quest for you!

SATURDAY 4 pm (DORKSTOCK TABLE B) CHEZ CTHULHU (Steve Jackson Games MIBs) – Chez Cthulhu brings the horror of Lovecraft’s Mythos right into your apartment . . . as if the leftovers from the Pizza with Absolutely Everything weren’t bad enough. Invite people over to your room . . . and sacrifice them!

SATURDAY 6 pm (DORKSTOCK TABLE B) JOHN KOVALIC DREW THESE TOO… (DORKSTOCK) – My Dwarves Fly!  Camden!  And other games that John has drawn outside of his prolific Munchkin habits.

SATURDAY 8 pm (DORKSTOCK TABLE B) CASH & GUNS (DORKSTOCK) – The heist went well! The loot is in the basement! But so is the rest of your gang, who all want a share of it. It’s the last scene of “Reservoir Dogs” in hilarious, frenetic, and easy-to-digest party game form! Run by the game’s artist, John Kovalic

SATURDAY 10 pm (DORKSTOCK TABLE B) KOBOLDS ATE MY BABY MIDNIGHT (ALMOST) MASSACRE (Scott “Igor” Olman) – ALL HAIL KING TORG! It’s Eat or be eaten as the Kobolds try and satisfy the King’s belly in this fast and furious beer and pretzels roleplaying game!

SUNDAY 10 am (DORKSTOCK TABLE A) OUT OF THE BOX RIP (John Kovalic)  – Play some of the greatest party games to come out of Madison’s Out Of the Box Publishing! It was far more than just Apples to Apples, you know!

SUNDAY 10 am (DORKSTOCK TABLE B) MUNCHKIN OZ (DORKSTOCK) – L. Frank Baum’s Oz books have been favorites of children and their parents ever since the books were published over a century ago. Create your own adventure with Munchkin Oz!

SUNDAY Noon (DORKSTOCK TABLE A)  CASH ‘n GUNS (John Kovalic) – The heist went well! The loot is in the basement! But so is the rest of your gang, who all want a share of it. It’s the last scene of “Reservoir Dogs” in hilarious, frenetic, and easy-to-digest party game form! Run by the game’s artist, John Kovalic

SUNDAY Noon (DORKSTOCK TABLE B)  CHEZ GREEK (Steve Jackson Games MIBs)  – It’s the hit Chez Geek, moved to a frat house. (Or sorority. Or both.) Pick your major. (Botany? Babes? Beer?) Tap a keg or two. Party hard, and try not to think about Finals Week.

SUNDAY 2 PM (DORKSTOCK TABLE A)  WARHAMSTER RALLY (DORKSTOCK) –  Choose one of the characters and race around the track on your Warhamster.

SUNDAY 2 PM (DORKSTOCK TABLE B)  TOON: MUNCHKIN (Steve Jackson Games MIBs)  – Adventurers have tried to dispose of Seymour the Dragon for years, only to come back beaten and badly Boggled. Will your hardy band do better?  When Munchkin meets Toon all Heck breaks loose.

Registration is now open, over at the Gamehole Con home page, and you can check out all the games they have in store for you at their event listings.