It was a hot, sunny Sunday in Pierce County, Wisconsin – one of those places outsiders might think of as “the Middle of Nowhere,” but others call “home.” The unseasonable warmth made for a delightful kind of early summer day to bring flowers to the graves of relatives, if that’s your sort of thing.

Judith and her sister are the sorts to bring flowers to grave sites. Their mother started them at a young age. And now, for the first time, they brought flowers to their mother’s site.

A century ago, people picnicked at graveyards, Judith tells me.

These places make me terribly uncomfortable – a position I hold to be perfectly rational and tenable. Daughter, Age 7, agrees.

As Judith and her sister walked Daughter, Age 7, around the Rock Elm Cemetery, looking for relatives, I wandered a bit on my own, more self-consciously ill at ease with the concept of mortality than normal. (Which is saying something).

Out of the corner of my eye, I spotted a headstone on its own, beneath the shade of a couple of small juniper trees. I’m not sure what drew me to it, but its dates gave me pause: 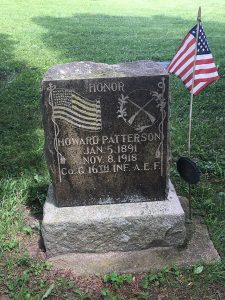 …the grave of a 27-year old American soldier who died, three days before the end of the war. At Sedan? Or of other injuries?

Howard Patterson, a 27-year-old of Maiden Rock, Wisconsin, had apparently died while serving with the 16th Infantry (sometimes known as “The Big Red One”) of the American Expeditionary Force in France…three days before the armistice.

Just one of those chance encounters that puts a timeless perspective on so much.

The American Legion had placed a flag at the grave, but in contrast to the other plots around the cemetery, there were no other flowers, no trinkets.

I wanted to find out more, and a quick internet search brought brought me to the history of the 16th, which saw its fair share of action in France, for an American unit:

Arguably the regiment’s most gallant action was the grueling drive that liberated the little village of Fléville in the Argonne forest region on 4 October 1918. This feat was significant in that the 16th Infantry was the only regiment in the entire First U.S. Army to take its main objective on the first day of the Meuse-Argonne Campaign. The 16th Infantry also participated in the 1st Division’s final drive of the war when the division attacked to seize the city of Sedan.

With the help of folks on Twitter (Michael Kinyon, in particular), we tracked down the cause of death, discovered amongst a list of Pierce County casualties:

(Skimming through the roster, the sheer number of deaths due to pneumonia is staggering.)

There’s little I can say right now that won’t seem trite at best, or clichéd at worst. But I would urge everyone to listen to the Hardcore History podcast’s magnificent six-part series on Word War I, “Blueprint for Armageddon.” Dan Carlin’s narrative is both gripping and sobering. Certainly, it gave me a new understanding of the horrors of this most hideous of wars.