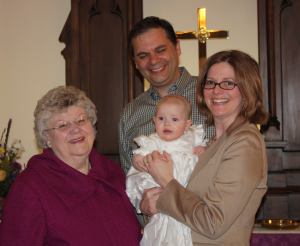 Janice and Lester welcomed me into their family, when Judith and I married, 20 years ago. And the warmth and generosity Janice showed me was as immediate as it was unconditional.

When I say “unconditional,” I mean it: Five weeks before Judith and I got married, I quit my job at the Wisconsin State Journal. If Janice was ever concerned that her daughter was marrying a cartoonist – let alone a now unemployed – cartoonist, she never mentioned it.

With my own family half a world away, Janice became my stand-in mom. There was the interest in my work; there was her excitement as Judith’s and my lives and careers grew together; there were the countless little acts of maternal kindness. And there were baked goods.

(To this day, I firmly believe baking someone almond bars is Midwestern shorthand for “good job. Keep going. You’ll be fine.”)

Janice loved many things: reading; the family cabin up North; crossword puzzles; the Tennis Channel; the Minnesota Vikings losing – which they managed to do often, just for her, I think. But mostly, there was Louisa.

In 2007, Judith’s Dad, Lester, passed away. In 2008, Louisa was born: at once an awful but miraculous intermission between Acts I and II. And though Janice never knew her own grandmothers, she quickly became the most amazing Gramma you’d ever hope your kid could have.

Gramma and Louisa became the light of each others’ lives. The two were inseparable, and hilarious: a Hope and Crosby that crossed generations. Laughs were loud, hugs were long, cuddles were often, and Janice became adept at bracing for a toddler who’d frequently fling herself at her Gramma, with no regard for her parent’s health insurance premiums.

Cunning duels of “I Spy” would break out during mealtimes, Gramma briefly gaining the upper-hand, choosing a particularly sneaky object; Louisa briefly reclaiming it by “spying” something she could only see “in her mind.” It was battle of wits worthy Kasparov versus Karpov, over a dinner table. It was glorious.

It’s been a month, now, and the right words are still hard to find. I keep rewriting and revising. The hurt is remains real, and language seems terribly insufficient.

We grow. We live. We thrive. We fall. One generation takes over from the next, unprepared, trepidatious, and uncertain. We lose our parents, we lose our teachers. We know we’re not ready. We see what’s coming.

We carry on, though, thankful for those who teach, and what they taught us.