The other day – and I’m about to do some serious name-dropping here – I had three friends in, from out of town. My pals Ken Hite and Wil Hindmarch (up from Chicago), along with Matt Forbeck (whom they picked up in Beloit, on the way). Cool, no? Right. I thought so too.

BUT WAIT! It got better!

As I sat there, gaming with three great pals, who also just happen to be some of gaming’s most admired writers, pushing little standee Zepplins across cardboard landscapes, my Daughter, Age 5, wanted in.

Gotta admit, I was beaming with Geek Dad pride, right there. My daughter wanted in on our game night!

Could I have been any happier at that moment? Answer points to “NO” (even though my Zepplin blew a massive lead, and got skunked at the finish line by that blackguard Hindmarch).

As much as I’d love to take credit for Daughter, Age 5’s growing love of gaming – you know, chalk it up to Wise Parental Decisions, and all that – and as much as I’d really really really like to think of myself as the World’s Greatest Dad…well, honestly? The fact that she loves gaming comes own to one thing: There are some terrific games out there for young kids, right now.

I’m talking about games that don’t underestimate kids’ intelligence with dull premises and duller play, but spark the imaginations of five-, four- and even three-year-olds. Nor do they insult the parents with milquetoast mechanics. Indeed, some of these games can also be played by adults, equally enjoyably.

If you have a toddler in the household, here are some kids’ games that I’m digging, right now. More important, they have Daughter, Age 5’s wholehearted squeal of approval. Two tiny, adorable, ridiculously cute thumbs up! 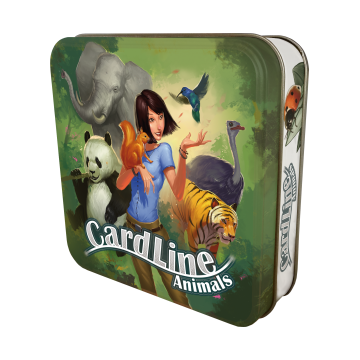 I’m a fan of Asmodee’s Timeline series of games, where players need to place historical events (battles, discoveries, technological progress) in the correct order. They’re not for really young kids, though, who won’t know what a printing press is, let alone when it was invented. Also, unless you mix many sets, replayability can  be a problem, once you learn the dates on the cards.

Cardline, on the other hand, takes a Top Trumps approach to its info – each card is an animal, with three statistics listed: size, weight and lifespan. Choose one of the three each game, and try to get rid of the cards in your hand by placing them, in order, along the card line.

An adult will be needed to read the cards, but really, that’s all there is to it. Kids love learning about the animals, and the terrific card art is delightful. The game is simple, but fun, and packed with yummy, crunchy learning. With three stats to choose from, replayability is good, especially for the little ones. Finally, to quote my pal James Wallis, “Huge cheers to Asmodee for the covers of the Timeline games. More strong, smart women on strong, smart games please.” 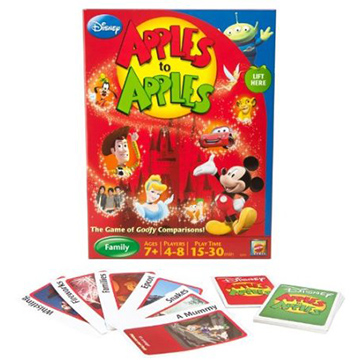 OK. First things first: while I helped develop Apples to Apples, I get nothing from it anymore. It’s Mattel’s baby, and I don’t even get copies of new editions, let alone royalty checks. I buy the games off the shelves like everyone else these days, quietly thrilled that they still use my art. But that’s it. Mattel doesn’t write…doesn’t call…it gets so…darn…lonely, sometimes…

ANYhoo, that said, I tend to like most of what Mattel’s done with the game…but I truly thought I’d hate Disney Apples to Apples, when I first saw it. While it’s cool to see my art on a licensed Disney product, that was it, for me. I thought Mattel had swung and missed, on this one. I didn’t like the pictures on the green cards, I didn’t think there were enough cards in the set, and I disliked the use of subjective language (Jaffar is “an evil wizard”) on the red cards’ flavor text.

Now, up to this point, their main involvement in gaming with the family had been rolling the dice for players as other, more complicated boardgames were being played. But with Disney Apples to Apples, as long as an adult reads the green cards out loud, the little ones could play along exactly as the adults were playing, since every red card had a picture on it. And they loved it. They loved choosing cards from their hands to play, and they loved picking cards when it was their turn to be the Judge. Scratch that: being the Judge blew their tiny little minds to smithereens. They simply couldn’t get enough. Plus, like many adults playing Apples to Apples, they didn’t care about the points at the end!

And don’t worry: Apples to Apples: Disney isn’t all princesses. Coming across Phineas and Ferb cards was a particular delight.

It’s easy to take Apples to Apples for granted, these days. But it still can surprise me, from time to time. 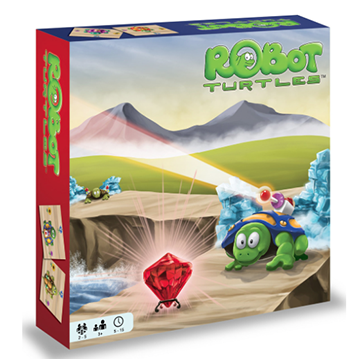 Ted Neward gave me the heads-up on the Robot Turtles Kickstarter, which ended up being ridiculously successful. The premise of the game seemed straightforward and admirable enough, if possibly a wee bit overreaching: it was “The Board Game for Little Programmers,” and could be played by kids as young as three.

Upon its arrival, it came off as a sort of Robo-Rally-Without-A-Shifting-Board (In other words, a Not-Fun Robo Rally) sort of thing: robot turtles were “programmed” to get gems places around the board, and that was it. It didn’t look promising.

Not gonna lie, here: Daughter, Age 5, absolutely adores Robot Turtles. Unlike the other games here, it’s less fun for adults – unless you enjoy watching lightbulbs going off in your children’s brains as they start to grok planning and strategy, which I do. Plus, the turtles are armed with lasers. Did you hear me? THE TURTLES ARE ARMED WITH FRICKIN’ LASERS! Daughter, Age 5, now makes sure there are lots of lovely ice obstacles in her turtle’s way, when setting up the board, to zap them with her lasers and melt them. The sound effects she makes are quite wonderful.

Technically, is Robot Turtles a game? No. It’s more a puzzle for kids to solve: a pastime, rather than actual competition. But that’s not a bad thing, especially at ages when kids don’t really grasp the difference between “fun” and “winning.” Robot Turtles contains many game-like elements, and kids love it. So I love Robot Turtles because of that.

Got your own recommendations for good games for young kids? Please do send them along!

Most everything reviewed in IT MUST BE MINE has been purchased. Off of store shelves. For monies. But if you’d like to drop us review copies of anything, HEY, who are we to say “no”?

Review copies should be addressed to:

We can’t review everything we receive, but everything does get a look and a play.

Click here for our handy-dandy online Feedback Form if you have questions.