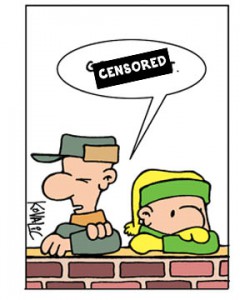 John, you really need to stop the swearing in the comic, especially vís January 1’s episode. It’s a real turn-off and not fitting for a fun comic strip, especially one inspired by “Peanuts.”
– Bill Kolasa

I’ll be honest – I don’t think the characters swear that often, in Dork Tower. There may be the occasional “bloody,” but mostly I fall back on the completely unsatisfying “Frak.” Yes, I went to the cuss-word well this once. I doubt I’ll return often.

I don’t swear, myself. Trust me on this one. I can do amazing acrobatics to get around a swear word. My friends should be able to verify this. And mock it. You’re not going to see me start throwing around profanities like pies in a Three Stooges short, either in real life or my little cartoon world.

That said, in the January 1 cartoon, I thought long and hard before using this particular cuss (See? I even have difficulty typing it here. I AM NO GOOD AT SWEARING!) In the end, it was the word I wanted to use. In the comic strip, Matt is often the angrier version of me. And for this particular last frame, I thought that falling back on “frak” or “blast” of “@!&@%*&#” would be a cop-out. Over-analyzing this totally, I was going for an understated gut-punch in that last panel.

I’m not saying I made the right choice, but it was carefully chosen. It was every bit the word I wanted to use – for better or for worse.

Are you going to be at Warpcon at the end of the month? It’s the deciding factor for attending or not this year!
– Becky Ottery

Sadly – and I’d hate for this to keep anyone else away from Warpcon – I will not be there.

Warpcon is one of my favotite cons on the face of this planet, period. It’s been my privilege to be a guest there for nine of the past ten or eleven years, or so.  I’d be there every year if I could. But from time to time, my schedule gets the best of me, and this is one of those years. I have some big, cool, secret things happening at the moment, and I’m needed Stateside.

I’ll miss Warpcon, and all my pals there, dearly. And I will be back next year, if they’ll have me! 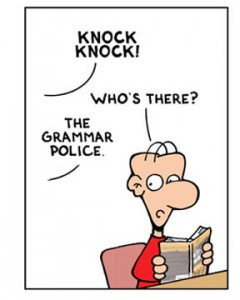 Wait (your Grammar Police cartoon) is wrong. It really should be “The Grammar Police, who?”. “Whom” should only be used if it indicates the object of the sentence or is used after a preposition. The OED has an extensive series of examples at oxforddictionaries.com  and it’s clear from tip three at the end that since the reply is the name of the Grammar Police again, then “who” is the correct word to use in the question as they are the subject.
– Mathew Meek

I was pretty confident the grammar was incorrect going into the gag  – even if I may not have been entirely sure why .

(I was also pretty confident this meant it could be filed under “irony,” but there are Irony Police out here as well, so I didn’t.)

In the end, it was just a very silly “knock knock” joke, and it made me giggle. So I went for it.

Honestly? I’m mostly surprised more people didn’t call me on it. But that link there  is a terrific explanation of the correct usage of “Who” and “Whom,” and I think we all learned something here, today! – John