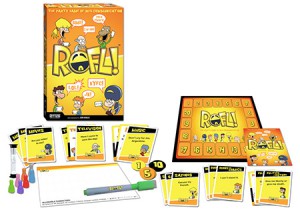 “ROFL!”, the party game I designed and illustrated, should be in stores today!

Copies of the game got to the British Isles a few weeks ago, so it’s been on sale there for a bit. First reports are great, which thrills me no end. The game also made an appearance at Nerdtacular last month, and Scott Johnson let me know that the feedback was fantastic.

Then, last week, the Dice Tower reviewed it, and I couldn’t be happier: no, no. Really. Take a look. Click on the video. Seriously. I’ll wait.

ROFL! is a game about shortening phrases, while still getting the message across. You try to do this by using as few characters as you can: keyboard characters, that is – letters, numbers, and some of the more common symbols on computers or smart phones. One player – who hasn’t seen the phrase – is the Guesser, and must figure it out.

You have shorten the phrase quickly, lest others beat you to the number of characters you want to use! Take too long, and you’ll find yourself having to add or subtract characters from your message. Some folks have described ROFL! as “Texting: The Game.” But non-texters and even texting haters enjoyed the playtests, so now I call it “Inverse name that Tune, with Sayings.” Unsurprisingly, Crytozoic’s marketing department chose not to use that. 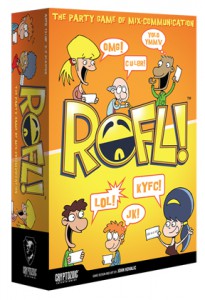 Game mechanics are only one part of party game success: content plays a huge role. Early on, we found that players like a broad range of quotations, but reacted strongest to the funnier lines. Geekdom is also well-represented in the first release: you’ll find Star Trek, Star Wars and Lord of the Rings lines well-represented in the 340 phrase cards…as well as a few more obscure ones. “Boom-sticks,” anybody?

The phrases in the game were culled from pop culture (books, comics, movies, music), politics, history or, frankly, anywhere. Most of them are well-known, and many of them are hilarious. But you don’t have to know the phrases, nor their origin or significance. The only important point is you have to get your message across to the Guesser. Sure, your mom may not know where “My cat’s breath smells like cat food” comes from. And your 12-year-old nephew might not grok “I am the walrus” or “Tear down this wall!” Nor has your born-again college roomie ever heard of Justin Timberlake! That’s OK. It’s your job to make sure she says “I’m bringing sexy back” first.

How do you get to go first? By shortening the message the most. How do you shorten a message? Any way you want! Players have dry-erase boards and markers, and 30 seconds at their disposal. They can use any symbols from a standard keyboard, and blank spaces are free.

For example, if the original message is “I broke my Wookiee.”

Sample condensed messages could be:

In the boardgaming world, party games can seem light, frivolous things. To a certain extent, many are. There’s nothing inherently wrong with that: the best ones fascinate me: they’re clever enough to satisfy hard-core gamers, they can provide moments of bliss in between more “serious” games, and they can be gateways to no-gaming (yet) family and friends.

Creating a “simple” game is harder than it sounds. The rules should take no more than a couple of minutes to explain to players, and ideally, a turn should be a few minutes long, at most. When I call “Apples to Apples” an almost-perfect game, I don’t do it lightly. It’s a beautiful, self-contained engine, packed tight like a perfect little ball. It can play up or down to whatever group is playing it, and the core mechanic has influenced countless other games – some of which are brilliant, and add significantly to the base idea.

I’ve tried to take everything I’d learned from years of working on clever, best-selling games like “Apples to Apples,” “Snorta” and “FAUX*cabulary,” and apply it to ROFL! I also made sure ROFL! was playtested like nobody’s business. Indeed, it’s been stated that the “thank you” list at the end of the rules reads a little bit like a “Who’s Who” of the hobby gaming industry (one of the benefits of having so many pals who are amazing game designers).

Working with the folks at Cryptozoic games was also a thrill. This is one terrific company, and the content they added to the game can’t be underestimated (any pop-culture card that’s not an 70s or 80s reference – and there are many – is most likely one they added). The quality of ROFL!’s components are also first-rate, and that’s 100% Cryptozoic’s doing.

I’ve been privileged to work with some tremendous folks, during this process. It’s no exaggeration to say that some of the finest minds in gaming helped out, at various points along the way. I think ROFL! is one of the best ideas I’ve ever had, made even better by the help of my friends and colleagues.

I’m proud of ROFL! I think it’s something special. I hope it shows, and I hope you enjoy it.