First off: HAPPY BIRTHDAY to my wonderful Mother, who really is quite remarkable. (Her only real fault is having a birthday that falls on Tax Day here in the United States, but I blame that on the US government, which switched the day several decades ago.)

Secondly: despite the danger of this blog turn into Tom Baker Photoshop Phun Hour, I did this: 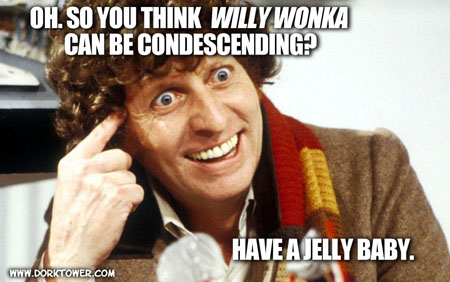 (Click on it, or here, for a larger version.)

Thirdly, it’s been a while since I updated my upcoming appearances. So here we go:

I don’t do many conventions, these days. By choice, I hasten to add: I get a ton of invitations, and there are many, many conventions I’d love to do. But on the whole, it’s far better for everyone if I simply stay home, and make games and comic books and, well, frankly, deadlines.

Also, my daughter is now four years old. My perfect weekend is simply spending time with her, and my wife. And while I miss shows like GenCon and Origins terribly, by not going to them for the last several years, I saw my daughter pull herself up for the first time, and also ride her tricycle under her own power for the first time. These moments are precious and rare, the Platinum Pieces in the Great Roleplaying Game of Life to me.

That said, I do still try and get to a few conventions every year. Here’s where I’ll be for the remainder of 2013.

There is also a possibility I may be able to make it to SPIEL, in Essen, in October, and maybe also to LUCCA COMICS AND GAMES in Lucca, Italy. But that makes October (already busy with my Daughter’s birthday, and Halloween) incredibly hectic. So let’s wait on those for the moment, shall we?

What does it take to get me to a convention? Usually, it needs to be something interesting. But there are many, many interesting conventions, so what else?

There are other considerations as well, of course. The main one is meeting the approval of Business Manager Monica, who scowls and gets all owly when someone wants chunks of my time. In fact, now’s a pretty good time to mention that ALL convention appearance requests must go through her. You can reach her through the Feedback form on this site.

But the above tend to be the Big Four. Most conventions I attend will hit at least two or three of them. Take Stellar Con last year, for example: Being able to try the vinegar barbecue of North Carolina for the first time was amazing; I was also able to pop in on my cousin Karen and her family; and my great pal Mike Stackpole was also a GoH.

Anyway, I hope to see you at one of the cons I do. Conventions are the heart of fandom, and I love everything about them.

I simply wish I had the time to do more of them.