The upcoming weekend is turning out to be a bit of a busy one, for me. Though I’m still hoping to take some weekend off, soon, following the marathon that the Munchkin Apocalypse game art became, it obviously won’t be this one. But Apocalypse is all in the past now. Done, done, DONE! Stick a Fork in it. A +5 Radioactive one! Huzzah!

Munchkin Apocalypse was a bit mad (180 cards in 28 days), but it was a blast (figuratively and literally, given some of the cards). This is definitely going to be the prettiest Munchkin game ever, and I think we may have some peeks at art to show you, soon. A few of the cards are amongst my favorites ever – although, I’ll be frank: with all the art specs that began “Hordes of…” “Many, Many…” and “Crowds of..,” I do feel just a teensy bit like I was hit by a bus. Wait. Make that “Hordes of” busses. To say nothing of that one card that required a D-Day Omaha Beach invasion scene!

Anyway, a couple of cool things are on the docket for this weekend.

If you’re in the Madison area, I’ll be joining local comedian and cartoonist Alan Talaga, as a guest on his hilarious Dan Potacke show. It’s at the Frequency, and the fun starts at 7 pm. There’s no cover charge. Think of it as a podcast that doesn’t – you know – actually involve any podcasting. It’ll be a hoot. I may have some swag to give away.

Madison’s general fandom convention takes place this Friday, Saturday and Sunday. I’ll be around, enjoying the panels and basking in the genius that guests of honor Larry Niven (!!!) and Kenneth Hite will be bringing to the proceedings. It all takes place at the Radisson Inn on Madison’s West Side, dangerously close to Pegasus Games and the Last Square, so there are very few reasons why you shouldn’t be there!

I’ll be doing a signing at Oddcon 1 pm on Saturday, along with my pal the ever-captivating Kenneth Hite.

Last weekend was the ACD Games Day distributor open house. There was much love for Munchkin and Dork Tower from retailers who came from as far away as the coasts, to partake in ACD Distributions‘ wonderful annual event, and it was great seeing old friends from the industry again. I was even able to get a few games in! Let me just say that Tsuro of the Sea from Calliope Games was a hoot! And I finally got to see UGH!, a tremendously fun card game that I illustrated for them (“Stonepunk” is definitely the direction I took its prehistoric theme in).

My arm was hardly recovered from Munchkin Apocalypse, but it’s always wonderful to sign stuff for the retailers. They’re on the front lines of this business, and anything I can do to help, I’ll try to. (NOTE: “Helping” often involves buying cool games from them, rather than Amazon. Hey – it’s a tough gig, but somebody’s gotta do it!) 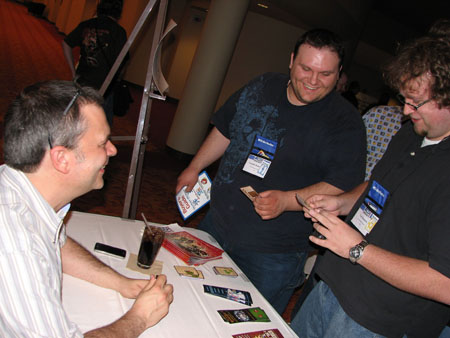 As promised…here’s a sneak-peek at the super-cool secret project I’m working on. MATT HAS A BUDDY! You may recognize him. IT MUST BE MINE! Hold on – it IS mine!

More to come on this as it develops!