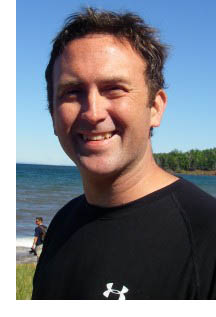 (March 11 note – Matt Forbeck wants to write 12 novels in 12 months in 2012. He’s doing it one trilogy at a time – George Lucas-like. The first Trilogy of the “12 for Twelve” project was fully funded. The second trilogy is now up on Kickstarter – and one last book is left to be unlocked in it, with only a few hours to go. Madness amongst authors is a good thing to support – help him get there, please).

Matt Forbeck is a great friend of mine.

He’s also widely known as the nicest guy in the gaming industry.

What may be less well-known, outside of gaming circles, anyway, is that he’s possibly the most disciplined writer in the business. He’s been a full-time author and game designer since 1989 – an amazing feat in a notoriously fickle industry like ours. His bibliography is testament to his commitment to his craft – he has major credits (and awards) in pretty much every field linked to gaming.

If there’s one thing I admire Matt for above all else, though, it’s as his role as a father. Matt’s dedication to and love for his family is evident to all who know him. He and his wife, Ann, have raised five terrific kids – one teenager and four eight-year-olds, now – and whenever Matt speaks of them, the love and joy is palpable.

In November, 2011, during National Novel Writing Month, Matt announced a shockingly ambitious project for the year 2012: “12 for Twelve.” He would write a novel every month during the upcoming year. He set up a Kickstarter page to fund the project, and in Matt’s own words, from the pitch:

“I plan on breaking 12 for ’12 up into four trilogies, and this Kickstarter project represents the first of them: the Brave New World Trilogy. If this one goes well, I’ll run other Kickstarters later in the year for the rest of the books.

This is not the kind of undertaking an established writer – let alone the father of five – does on a whim. So, I had a few questions I wanted to ask Matt…

No, I’m actually pretty happy at the moment. The first 12 for ’12 Kickstarter’s going great, and I just made the insane decision to lower the stretch goal to unlock Book 3 by $3,000, so I’d say I’m thrilled.

And I’m sane enough to remember that YOU’RE the nicest guy in gaming. Don’t make me do something mean to prove I’m right.

Oh, you mean, am I crazy? Not clinically or certifiably, I don’t think. I do like taking bold yet calculated chances, and I can see how that might give people the impression that I’m nuts or even just charitably incautious. It’s not true at all though.

I write fast, and I write a lot, and I’ve been doing so for decades now. The novels I plan to write are shorter ones, about 50,000 words each. That’s bound to make it a bit more manageable. Most of my books have been in the 80,000-word range, but I’m going to self-publish these as ebooks once the Kickstarter backers get them, and the length of an ebook doesn’t seem to matter as much.

As far as writing 600,000 publishable words in a year, I don’t think this will be the first time I’ve done that, although I’d have to go back and add things up to be sure.

Of course, I’m still going to be writing the Magic: The Gathering comic for IDW and chipping away at a few other projects for other people, so…

Okay, call me mad if you like. But I can still do it. I don’t fear hard work.

In the last month, have you gotten tired of people asking if you mad?

No, it’s actually kind of fun and part of the whole point of 12 for ’12. I want people to think it’s crazy. I want them to say, “No way,” and belly up to the stage while I crack my knuckles and say, “Hey, watch this.”

Cory Doctorow’s famous for saying that authors aren’t competing with theft from copying of books. We’re competing with being ignored. I want to do something no one can ignore, and that’s what 12 for ’12 is all about.

Well, that and telling great, fun stories for people to enjoy too.

You’re involved in so many different projects, all over the board. What kind of time will “12 for Twelve” allow you for other professional endeavors?

Not a lot, but as you say, I’m fairly disciplined about my work. Barring a disaster of some sort, I should be able to write the books and the Magic comic and take care of a few other projects. It’ll be a long year, but since I love to write, I expect it to fly right by. 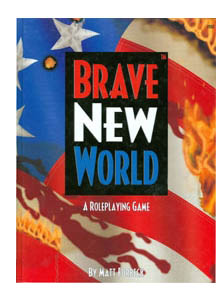 Your first three novels for 2012 will form a Brave New World trilogy. You created this setting for a roleplaying game almost 15 years ago, now. I imagine you had many ideas for stories in the Brave New World universe bouncing around in your head.

Yes! And I never got to tell all of them. This is finally my chance to get back to this setting I created and wrap things up the way I’d hope to do with the roleplaying game. The first book follows the plot of the BNW feature film the folks at Reactor 88 Studios have been working on, so I’m looking forward to seeing how people enjoy it.

The other books step the stories forward farther and allow me to explore parts of BNW that I never had the chance to reveal much about. Plus, I get to explore the characters I created in more depth than an RPG allows. It’s going to be a blast.

There’s always a chance, although that’s really up to my pals at AEG, who own the rights to the game. In the meantime, my friends at DriveThruRPG set up a deal for my Kickstarter backers. A PDF of the game’s core rules are usually $18, but those who pledge $25 or more to the project get a link that lets them buy the RPG PDF for only $5.

Wow, that was a lot of initials.

Your initial Kickstarter goal of $3,000 has been surpassed by over 200%, as of writing, and has “unlocked” the second book. If you don’t reach $15,000 “ultimate goal,” though, will there be a separate Kickstarter for the last book of the trilogy? And will other “12 for Twelve” books be on a book-by-book Kickstarter basis?

Actually, we just cracked 300% earlier today, and we’re charging ahead. Despite that, we only have until Sunday at noon Central Time, so reaching $15,000 seems a bit of a feat.

Because of that, I just slashed $3,000 off that ultimate goal. Now we only need to reach $12k to unlock all three books, plus a few other goodies I tossed in like a color map and a short story from the setting for the next 12 for ’12 trilogy, something I call Shotguns & Sorcery. With any luck, we should be able to smash through it.

I plan to set up Kickstarters for most of the 12 for ’12 books as trilogies. I might take one of those trilogies and break it up into individual books, though, later in the year.

As you might be able to tell, I’m making up chunks of this as I go along, and little of it is carved in stone. That’s one of the things that makes it so exciting.

Obviously, Kickstarter’s been successful for you. Do you have any tips for other writers wanting to try it?

Do your research and have a plan before you set out. It also helps if you can give backers a good reason to trust you. I’m fortunate enough to have had a long career writing books and games, so when backers check out the Kickstarter, they know what they going to see from me and that I won’t let them down.

If you’re just starting out and don’t have that benefit, you need to find some other way to engender trust: endorsements, snazzy graphics, a real show of effort, and so on. Or you need to set lower goals to start with and work the level of trust your fans have in you up from there. There’s no magic bullet.

You Tweet, you blog, you use POD and electronic publishing outlets, and you know how to run a terrific Kickstarter campaign. If you’ll pardon the phrasing, it’s a brave new world indeed for writers, and you seem to have embraced all aspects of it. How hard is it, staying on top of new tools in a field traditionally tied to ink and paper?

I’m a bit of an extrovert, so the social media part isn’t all that hard. I’d be blogging and tweeting whether I had a project going or not.

As for publishing, I spent four years as the co-founder and president of Pinnacle Entertainment Group, and I ran its tabletop gaming division while I was there. Many of the skills I used there — establishing a schedule and workflow, contracting outside help, graphic design, typography, HTML coding, and so on — just happen to translate perfectly well from paper publishing to electronic publishing.

The fact that I like to learn new things all the time plays into that too. I suppose that’s one reason I love games so much. In a lot of ways, playing games means learning new things like rules and strategies on a regular basis and having fun at it.

You haven’t abandoned traditional publishing, either. Novels like Amortals, (Angry Robot Books) have received widespread acclaim. When you see online feuds between electronically self-published authors and traditional authors, do you ever feel more loyalty to one side or the other?

Nope. I can see why there are tensions between the two camps, particularly among those who have planted their flags squarely in one or the other. I don’t let myself get wound up in that though. I’m here to tell great stories and deliver those to readers in whatever form they like.

More to the point, I don’t see that the two formats are mutually exclusive. They’re going to co-exist for the foreseeable future, so we might as well all learn to get along.

With you, family always comes first. What have their thoughts been on “12 for Twelve”? Is Ann still speaking to you?

As you know, Ann’s my rock. I ran every bit of this past her, explained to her what I was thinking, and watched her poke holes into it, which was just what I wanted her to to. I didn’t proceed on this until she said yes, as it’s going to affect her life just as much as mine,

She’s a school social worker, out there helping homeless kids in her district, so she doesn’t deal with things like this every day. But she loves reading, and she’s whip-smart and asks all the right questions. I even ran the cut of the ultimate stretch goal past her before I announced it. If I can’t sell her on a plan, how can I hope to sell it to anyone else?

As for the kids, they love it. They’re constantly asking me how high the Kickstarter is up to now. Here’s hoping they’ll be just as happy about seeing me chained to my desk while I write the books, but I think they’re used to that by now.