Anyway, the long and the short of it is that this week, Dork Tower will run on Tuesday and Thursday, as I work on getting a backlog together. I’ll try and get a third strip up, but can’t promise anything in that regard. Fingers crossed.

In the meantime, here’s this morning’s Warm-Up Sketch: “A Girl and her Dragon.” I don’t think I had a young Anne McCaffrey in mind when I quickly doodled it, but I don’t wonder whether her passing last week was why I had dragons on the mind.

Wouldn’t it be nice to think so? 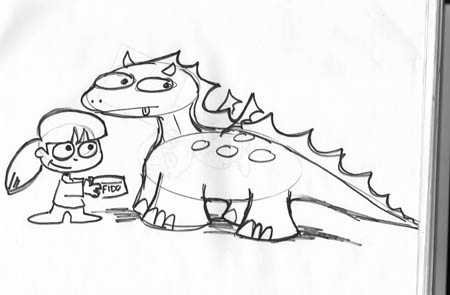 If you click on the image, you SHOULD see a larger version of the drawing.

If I post more such things in the future, would you prefer to see them here, in the blog, or on the main website, where the comic strip appears? Just curious.