Muskrat Ramblings
Get Your GEEK.KON
posted by John

I’ll be at GEEK.KON this weekend, and yes, it is a bit sad when it’s a big deal (for me, anyway), that I’m appearing at even a local convention anymore. But apart from Dorkstock/Rock-Con, I believe this is my last show of the year. But, you know, kid and all…

Geek.Kon is Madison Wisconsin’s very own anime convention, sci-fi convention, and gaming convention all rolled into one! Geek.Kon is a place to celebrate all that is geeky. Especially if you can’t mke it to Dragon*Con or PAX. I’ve always heard great things about the show, but I’ve never been able to make it, so I’m truly excited to be a guest there, and check it out first-hand.

Anyway, here’s where I’ll be:

I think there are a couple of charity game events scattered around here, too…as well as a ton of other goodness at the show.

Not only that: a lot of these will be appearances with great friends of mine. In fact, almost the entire guest-list is a who’s who of folks I like to go out drinking with. So there will also probably be drinking involved.

I’ll be trying to get some games in as well: I’ll have quite a few with me, and will be particularly interested in playtesting a new game I came up with: the party game formerly known as ROFL!, now tentatively titled “What The Fraze?” But there will also be Munchkin and Apples to Apples involved, as well as a new Cineplexity variation I’m eager to try out.

Hope to see you there!

I photobomb a Steve Jackson photo-op. 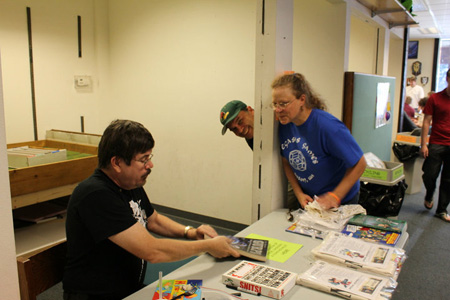 The CINEPLEXITY guys and I scheme. The scheming was good. 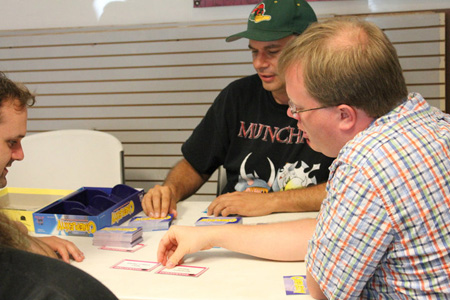 Scheming, from a distance. 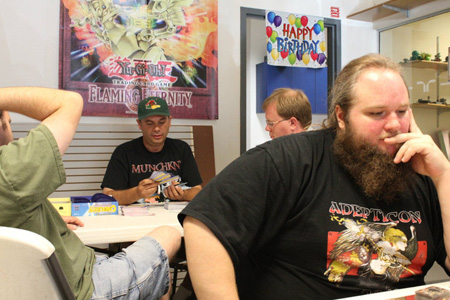 Staff and friends of Pegasus Games. NOTE TO SELF: don’t start chewing Japanese wasabi peas moments before a photo. 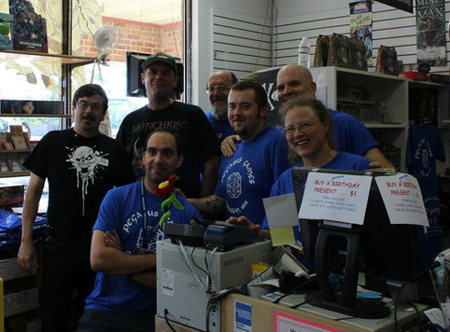 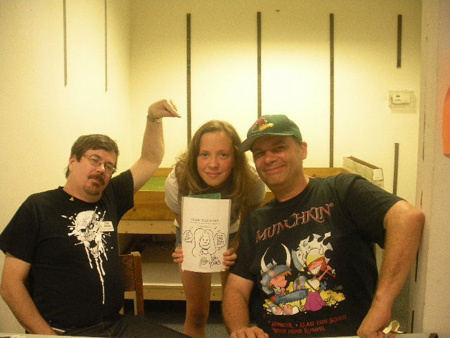 The lines were LONG, the crowd was awesome, nd there WAS cake! Thanks, Pegasus! Here’s to the next 30!

I’m thinking of starting a Twitter/Web-based crowd-sourced downloadable negotiable certificate for inappropriate touching and fondling that can be printed and redeemed as needed.

It shall be called GROPON.