OK. Partly, it was because our cat, Doozer, brought a mouse to bed. A live mouse. Which he does from time to time. He’s a very sharing cat, that way.

But mostly it’s because I’m obsessing about tomorrow’s Dork Tower.

It’s an idea that came to me suddenly, last week. And I think it’s a good idea. I like it.

But it may get some people upset.

And it will sit there over the weekend, waiting for Monday’s cartoon to put it in a little context.

I’m hoping people DON’T get upset by it. But I hope it makes people think.

Mostly, however, I hope I’ve chosen my words correctly. I’m very much hoping some folks, including some friends – especially friends in a company I very much enjoy the products of – don’t overreact to it, or take it in a way I’m not really intending.

So why publish the cartoon at all?

When I noticed what I noticed, and got the idea for the strip, I simply thought it was funny.

But then, I realized, one of the Dork Tower characters would ALSO notice what I noticed, and would say something.

That’s the weird thing about working with characters this long. In your mind, they become well-defined, and you start to think you know exactly what they’ll do in any situation.

But sometimes, they’ll surprise you.

I considered not running tomorrow’s strip. Yet, that seemed very unfair to this character. It seemed to be stifling him. It seemed that I’d be taking something away from him, and all of a sudden, I started feeling odd about NOT running the strip. Even given the potential reaction. And I’ll be honest, THAT surprised me.

Do creators have to be true to their characters? I’m not sure, but…no. Wait. Dammit, I am sure. My gut tells me “yes – yes, they do.” And I believe it.

So I’ve been running over the wording of the strip in my mind, obsessing about it, incessantly for a couple of days now. A couple of days, and last night, in particular.

I like the strip – a lot – and I believe that what the character says needs to be said. Indeed, it HAS been said, by others. And my character WOULD say

I just hope I chose my words correctly.

Obsess much, John? Yeah. A little.

I’ll be appearing at PEGASUS GAMES this coming Saturday, August 28, from 1-3 pm, with (wait for it) STEVE JACKSON hisslef! Come play some Munchkin, get stuff signed, win prizes and help celebrate Pegasus’ 30th birthday in grand style! Lots of other folks will be there, and there WILL be cake! 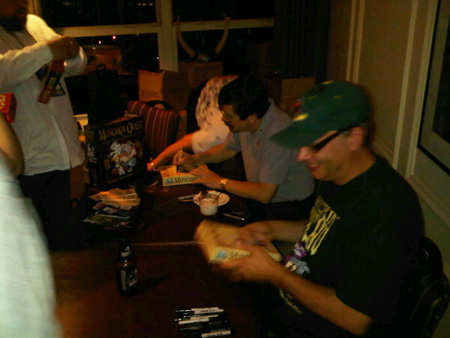 ALSO THIS WEEK, I’ll be at the Henry Vilas Zoo Friday, August 27, with Phil Yeh AND Phil Ortiz (from The Simpsons), as Cartoonists Across America draws a big honkin’ mural, all in the name of literacy! Fun times! (Not sure I’ll be there the WHOLE time, but I’ll try to make sure I’m there at LEAST from noon to 3 pm…)