I don’t do this often, but a really good friend could use some help.

My pal James is a very clever games designer (not to mention all-around smashing bloke), and has a game entered into for the Cadburys pocket game competition: “Flick Racer.”

It is a very nifty game, and it’s already on the short-list of finalists. It would be good to see it win.

How good? Quantifiably good? Well, yes, actually. Not to disparage any other game, but, well, darnnit, the fact of the matter is that game that is in the lead is NOT a very good game. At all. It’s a spin-the-randomiser-move-your-dobber kinda game, nd while that’s all well and good, the last time anybody came up with anything new or nifty in that genre, the Black Death was also making headlines.

Now, I’m not SAYING that poorly designed games cause devastating plagues across Europe and Asia. Or that God kills a kitten whenever a child is given a bad game. But evil is evil, and Cadbury’s will give away 25,000 copies of a bad game, and, well, you see where this might lead.

Also, there’s a small but tidy cash prize, and I’m not SAYING James will buy you a drink should he win, but…well, yes. Yes, in fact, I am saying that, and he jolly well should buy you a pint. But this is me talking.

So if you would vote for Flick Racer, I truly would be ever so thankful. (If you got a chuckle out of Dork Tower or Munchkin in the last month or so, think of this as a VERY cheap tip in the ol’ tin can of life).

Please go here to vote for “Flick Racer”: http://www.pocketgamecompetition.co.uk/media/926424-Flick-Racer. You have to sign up, but it’s painless and/or easy. I did it, and I’m really hoping you will too.

Please vote, and get your friends to vote. James is one of the Good Guys, and life is too short for bad games.

UPDATE (2:50 pm CST): “Flick Racer” took the lead by a single vote, but the moment it did, Cadburys took own the game’s voting page, and all references to the game. The above link gets a 404 Error. I’m trying to let James know ASAP, so we can find out what’s what.

Also, I recall I rather promised James that the Army of Dorkness would come to his rescue. So it would be a tad embarrassing if it didn’t. Not to put you on the spot or anything. Ahem.

James is British, by the way. Yet I’m not sure entirely why I slipped into my London vernacular just now.

****
Are you at GenCon? Then I hate you (I don’t, actually) and I am jealous of you (I am, actually). But I would be chuffed if you wandered over to the the Indy Press Revolution booth (#2339) and picked up a copy of THE BONES, published by Gameplaywright, a super little book from a super little company about dice, and the gamers who love/hate them. 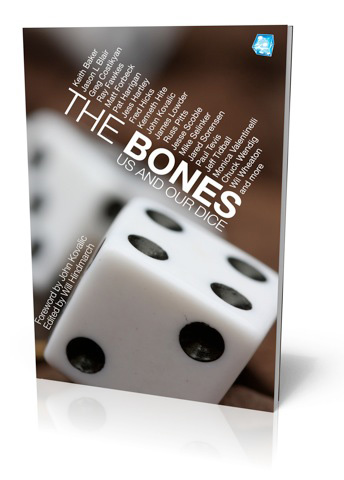 Do not let the fact that I wrote the introduction to this book put you off buying it. It’s really a special little tome. The stellar contributor list is:

I mean, look, in a few hours you’re probably gonna be standing in line to give Wil Wheaton a die anyway, so why not have him sign THE BONES while you’re at it?

Here’s the promo blurb from THE BONES, that says it better than I could:

“This isn’t about math. It’s about unlucky breaks and victory against all odds.

This isn’t about percentiles and probabilities. It’s about late-night game-ending rolls where everything hinges on that climactic moment when one single die skitters across the table and determines the fate of a hero, a city, an empire…

The Bones gathers writing about fandom and family—about gamers, camaraderie, and memories— and ties them together where they meet: our dice. These are essays and anecdotes about the ways dice make us crazy, about the stakes we play for and the thrill we get from not knowing what the next roll will bring.

Step back and look at how we play with dice.”

And on Sunday, from 1-2 pm, several authors who contributed will be at the Indy Press Revolution booth, signing as well.

Mythos Buddies series two is safely off to the factory.

We had a little last-minute fun, when we discovered the glue used in making the Buddies didn’t really work on the glow-in-the-dark version. So, while we’re working on a solution, I had to come up with a new buddy in a matter of hours.

So, gentles all, I give you… 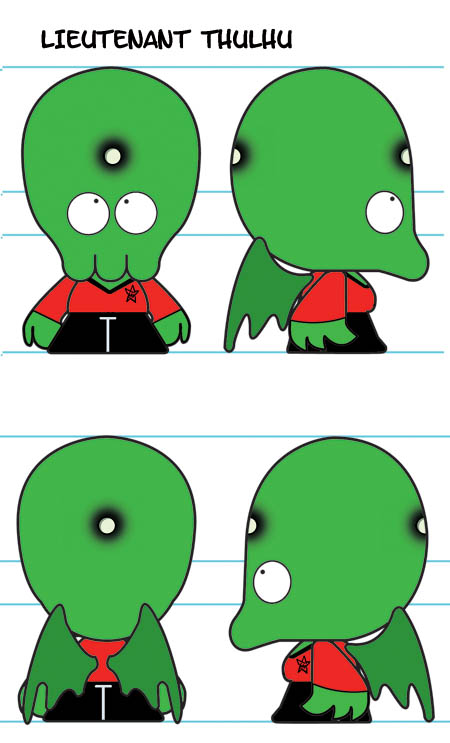 Coming soon (I probably should have looked up when, exactly) to a counter near you.

Thanks, and GET THE VOTE OUT FOR MY PAL JAMES!