IT MUST BE MINE: Occasional reviews of various things Cool and Otherwise

OK. If I’m gonna do some reviewing here, I really want to focus on the positive, rather than the negative. To point people towards what is good and grand in geekdom, not dwell in the muck and mire of mediocrity.

I just picked up a copy of the Dungeons and Dragons 4th Edition Character Record Sheets: retail price $9.95.

Though largely superfluous (you could almost always just photocopy the character record pages from your handy-dandy core books, regardless of what game you had), commercial packs of Character Record Sheets represented potential in a way that merely Xeroxed copies simply couldn’t – especially in the days when photocopiers produced more “good intentions” than “sharp, crisp copies.”

Page after page of Exactly The Same Page, to my fevered young mind, seemed to signify nothing less than the dozens of characters just waiting to be a-rolled. This was a veritable Futures Market in Fantasy Roleplay Characters.

To this day (in much the same way a single-line adventure description in a convention program will) a brand-spankin’ new pack of Character Sheets will catapult me back to the days when this was all still new, magical and limitless! 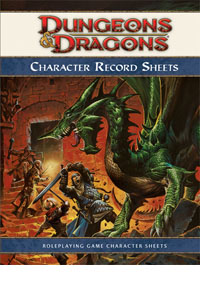 Now, I’m quite the fan of 4th Edition: I think it’s a superb release that plays to my particular RPG style and strengths. So I was quite excited at the prospect of lovely, untouched Character Sheets simply awaiting the results of my dice rolling before legions of new characters would be at my beck and call.

Anyway, as I said, I picked up the Character Record Sheets Tuesday. Did I mention the price? Ten bucks, close as dammit?

And the package contains…

Yes, four. In a lovely folder, mind you. The kind Target usually sells for $.99 during Back To School Sales.

Yup. In fact, the blurb on the back cover of the package even has the audacity to suggest that two of the character record sheets are a “BONUS!”, as they are “widescreen-style…that doesn’t crowd middle of the table .” So, like, with two of the sheets considered “BONUS!”, the original release would have only had the two non-widescreen character sheets in it?

Now, as Character Sheets go, these are perfectly fine Character Sheets. They are concise and well laid-out, whether wide-screen or otherwise. My only niggling complaint would be that SPACE TO DRAW CHARACTERS SHOULD GO ON THE FRONT OF THE SHEETS, NOT THE BACK! But I’m biased like that (in much the same way, I walk around screaming SALT AND VINEGAR – BLUE! CHEESE AND ONION – GREEN! ie, in a way that most sensible consumer simply don’t).

Again: I do like D&D4. A lot. I like character record sheets. A lot. But WoTC’s Dungeons $ Dragons Character Record Sheets (did I mention retail price $9.95?) is simply one of the most absurd, almost…almost cynical releases I think I’ve ever seen in this industry. Not only is this not even in the same ballpark as Green Ronin’s old Character Record Folio (retail price: $4.50) (IMHO, the apex of Character Record technology), it’s several giant steps back from the basic pads of record sheets of yore.

Yes, I can just go to Kinko’s, and make more copies. I’ll kinda have to, now. Or just download them for free, of course (“BONUS!” horizontal layout notwithstanding, that is). Yet free downloads are no excuse for a pricey printed product. The basic idea behind the package is sound: at $4.95, I might have gone for this. Even with eight more character sheets included, it might have slipped by, unnoticed. Yet as it stands…well, all this can possibly lead to is more blogs tiresomely spelling “Hasbro” as “Ha$bro,” and nobody wants that.

What a load of sheet.